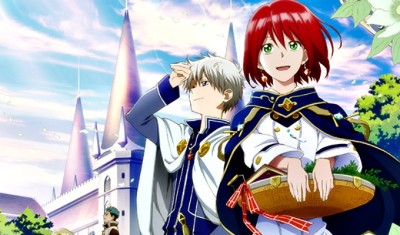 FUNimation Entertainment is planning to simulcast twice as many shows for Summer 2015 – with the twenty titles set including a mix of fan favorites and brand new titles.

As FUNimation CEO/Founder Gen Fukunaga put it,  “Fans are in for the biggest and best season of simulcasts from FUNimation this summer. With a mix of new episodes from popular series like Fairy Tail and The Heroic Legend of Arslan as well as new series including Gangsta. and Snow White with the Red Hair (pictured Above) – now is the time to become a FUNimation streaming service subscriber.”

FLOWER MOUND, TEXAS – July 1, 2015. FUNimation® Entertainment announced today details on its Summer 2015 simulcast season. This summer, FUNimation has assembled a line-up of 20 titles – a mix of fan favorites as well as brand new titles. Each and every week, subscribers will be able to enjoy new episodes of each show in commercial-free 1080p.

“Fans are in for the biggest and best season of simulcasts from FUNimation this summer,” said Gen Fukunaga, CEO and founder of FUNimation. “With a mix of new episodes from popular series like Fairy Tail and The Heroic Legend of Arslan as well as new series including Gangsta. and Snow White with the Red Hair – now is the time to become a FUNimation streaming service subscriber.”

The Heroic Legend of Arslan

SHIMONETA: A Boring World Where the Concept of Dirty Jokes Doesn’t Exist

“FUNimation stands alone in the industry offering access to the best in sub and dub titles and to its extensive library of more than 400 anime and live action shows and movies,” said Mike DuBoise, EVP and COO of FUNimation. “The breadth of the shows this season demonstrates our commitment to the fans, and we look forward to sharing this season with them.”

In a city filled with sin and scandal, Worick and Nicolas have made a name for themselves as men who can get the job done. Super-powered Twilight Nic has no problem getting his hands dirty, but when the situation requires a little more charm Worick is ready to use his own unique skills to keep the situation under control. Working independently, taking jobs from both the mafia and police, these unique Handy Men navigate the seedy underworld of Ergastulum in style leaving a trail of chaos behind them.

Hachimitsu Academy, a prestigious all-girls school, has finally become co-ed, and average teen Kiyoshi is one of five boys to enroll. Unfortunately, an underground student council of ruthless, totally hot female students clandestinely rules the school! And when the boys are caught peeping, they’re sent to the school’s prison, where their punishment comes in the form of whips and chains.

Forced to retreat to floating cities due to an invasion of magical armored insects, humanity must now depend on Sky Wizards to battle the menace via mid-air battles. Once known as the “Black Master Swordsman,” Kanata Age is now considered a traitor and is assigned to lead an F-class of mismatched mages. Misora Whitale has all the enthusiasm to be a leader, but she’s failed 100 consecutive tests. Rico Flamel is a genius sniper, but she’s a little self-absorbed, and Lecty Eisenach is a candidate with all the ambition but zero confidence. It’s up to Kanata Age to train the troubled trio to become accomplished Sky Wizards.

Chaos Dragon
Chaos Dragon tells the story of two countries locked in a never-ending war. In the middle of this chaos lies Nil Kamui, an island country that lost its independence after a guardian god known as Red Dragon spiraled out of control. Desperate to put a stop to Red Dragon’s rampage, a small group of heroes rise up to bring peace back to their world.

In the kingdom of Tanbarun lives an independent young pharmacist named Shirayuki. Shirayuki is a plain girl, save for her shock of beautiful apple-red hair. Her stunning mane gets her noticed by the prince, but instead of romancing her, he demands she be his concubine. Shirayuki chops off her lovely locks, and runs away to the neighboring kingdom where she befriends a handsome stranger.

FUNimation All-AccessPass subscribers get unlimited access to Broadcast Dubs, as well as the latest simulcast shows, and an almost endless catalog of dubbed and subtitled anime episodes and movies – all in commercial-free, high quality video.  Paid subscription pricing starts as low as $4.99 per month.  Fans are encouraged to sign up now to avoid missing even a single show of the summer season.