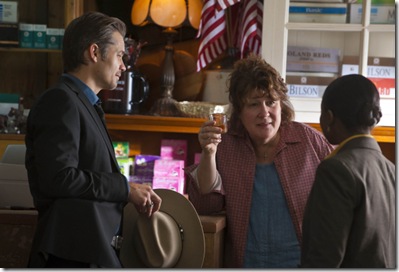 The Moonshine War opens shortly [minutes] after the wild shootout that concluded Justified’s first season finale. From the scene of the shootout, Raylan [Timothy Olyphant] and Boyd [Walton Goggins], separately track the lone surviving assassin – leading to another shootout outside a private jet. The upshot of the situation is that Raylan returns to Miami to try to work things out with the mob boss whose guy he killed to open the series. Things don’t work out quite as he’d planned.

Back in Harlan, we follow Raylan from the point where he turns over his weapon, through the debriefing and mounds of paperwork, until, finally, Deputy Rachel Brooks [Erica Tazel] pulls him away from the boring parts to help her track down a sexual offender named James Earl Dean. This brings him into contact with Mags Bennett [Margo Martindale] at the general store she runs as a front to a major marijuana growing business. Hoping to capitalize on the death of Beau Crowder, Mags’ family business is attempting to expand into his territory.

Brooks and Givens are following up a tip on Dean’s location – a tip given by a man [Chris Mulkey] whose daughter [Kaitlyn Dever] has been the object of Dean’s attentions, which leads to encounters with Mags’ sons – Dickie [Jeremy Davies, Lost], Coover [Brad William Henke] and Doyle [Joseph Lyle Taylor.

The second season premiere was written by series creator Graham Yost, from a story by Yost and the creator of Raylan Givens, Elmore Leonard. It’s a dense episode, with layers on layers, yet never dull or boring [in keeping with Leonard’s philosophy of leaving out the parts people skip over]. Adam Arkin shows, once again, why he’s in demand as a director – the episode looks great and moves like Elmore Leonard prose.

These layers are apparent in scenes where Givens deals with various of the Bennetts. When he’s talking with Mags in the general store, it’s clear that he and Mags have known each other for a long time – though it’s been a while since they last spoke. There’s genuine affection and respect between them, but we can also see that if necessary Mags willingly throw Raylan under a bus to protect her family – and her family business. It works the other way, too – if he had to, Raylan would arrest Mags in a heartbeat, or do whatever was required to protect himself.

Givens is the kind of person who was born a hundred years too late and he operates by a code that isn’t precisely the same as the law. His solution a problem might be to provoke an antagonist to draw down, and then shoot him – or he might as easily create a situation where his antagonist could kill himself by firing his weapon. He could even talk his way out of a situation, or resort to fisticuffs. Always, though, his actions remain within the bounds of his particular code – he has found his own personal sweet spot between pragmatism and idealism.

Timothy Olyphant has played heroic characters before, as well as plain folks, bad guys and even an ethical hitman, but Raylan Givens is easily his most complex role and he owns it.

Nick Searcy is delightful as givens’ boss, Art Mullen – who muses on Givens thoughts for his next weapon, ‘why not get an Uzi?’ Erica Tazel’s Rachel Brooks is a hard-working woman who has earned her place in the U.S. Marshals, but recognizes when she’s out of her depth and knows when to ask for help. As Boyd Crowder, Walton Goggins takes a character whose every word might be a lie and makes us want to listen, anyway. Natalie Zea is remarkably sexy as Givens’ ex-wife, Winona Hawkins, but she’s equally bright and does not suffer fools – it’s easy to see why she and Givens didn’t work: they’re too much alike.

In The Moonshine War, though, the spotlight is on Margo Martindale’s debut as Mags Bennett. She looks like a middle-aged grandmother but beneath her show of etiquette, there is a side of her that is a stone cold killer. She can be sweetness and light one moment and something from the hellmouth the next and Martindale’s performance shows both of those extremes and all the shadings in between.

Based on The Moonshine War and two other episodes provided by FX, I can safely say that while Justified might have been one of last season’s fifteen best shows, it will rank considerably higher this season.