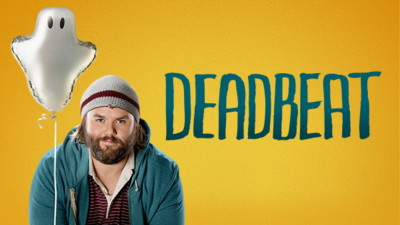 Hulu’s supernatural comedy Deadbeat has been given a third season order.

The series stars Tyler Labine as a ‘hapless but gifted’ medium who does what he must to enable New York’s ghosts with their unfinished business.

SANTA MONICA, CA – May 26, 2015 – Hulu announced today that the Hulu Original series Deadbeat has been renewed for a third season with a 13-episode order. Produced by Lionsgate Television, the series is co-created by Cody Heller and Brett Konner (Wilfred, The Inbetweeners) and executive produced by showrunner Dan Lagana. Dede Gardner, Jeremy Kleiner and Sarah Esberg from Brad Pitt’s Plan B Entertainment are producers on the show.

The half-hour comedyseries stars Tyler Labine (Tucker & Dale vs. Evil, Reaper) as Kevin Pacalioglu, a hapless but gifted medium who will go to any lengths to help New York’s ghosts settle their unfinished business. Brandon T. Jackson (Tropic Thunder) plays his savvy best friend, Roofie. Cat Deeley (So You Think You Can Dance) stars as Camomile White, a glamorous celebrity medium who is Pacalioglu’s rival and nemesis, and Lucy DeVito as Sue, Camomile’s once put upon assistant.

“Deadbeat is a uniquely imaginative and charming series,” said Craig Erwich, Senior Vice President and Head of Content, Hulu. “We are very happy to bring it back for another hilarious season and look forward to sharing new ghostly stories.”

A premiere date for season threewill be announced at a later time.

Lionsgate is a premier next generation global content leader with a strong and diversified presence in motion picture production and distribution, television programming and syndication, home entertainment, digital distribution, channel platforms and international distribution and sales. The Company currently has more than 30 television shows on over 20 different networks spanning its primetime production, distribution and syndication businesses, including such critically-acclaimed hits as the multiple Emmy Award-winning Mad Men and Nurse Jackie, the broadcast network series Nashville, the syndication success The Wendy Williams Show, the critically-acclaimed hit series Orange is the New Black and the breakout series The Royals.