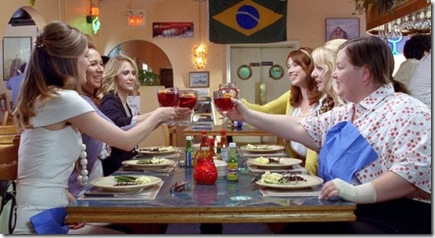 I think I laughed maybe twice over the course of the two trailers for Bridesmaids. Despite this, I decided that I would check out the film for a couple of reasons – the producing directing team of Judd Apatow and Paul Feig, and the combination of Kristen Wiig, Rose Byrne and Melissa McCarthy. It didn’t hurt that Wiig also co-wrote the film. The result is about 75% hilarious and 50% cringeworthy [there’s a 25% overlap…].

Annie Walker [Wiig] is a failure. Her cake shop went bankrupt and now she’s stuck in a job she hates, having sex with a hunky jackass [Jon Hamm], and sharing a house with a very strange British brother and sister. To make matters worse, her best friend for most of her life, Lillian [Maya Rudolph], has just gotten engaged and asked her to be Maid of Honor.

While Bridesmaids will likely be described as a female take on Hangover, it is a good deal more than that. For one thing, it’s no post-wedding adventure – it’s a tale from pre-engagement through the actual wedding. For another, although its humor descends into a similar gutter, that humor is rooted in honest female behavior and comes across as far surprising because of it.

Watching Annie hit bottom, while everyone around her seems to be doing fine is the base source of much of the humor because it takes her forever to twig to the fact that it’s mostly her own fault that she’s sunk so low. In fact, as one example, she has such a low opinion of both men and herself, that she entirely misses the genuine niceness of Officer Rhodes [Chris O’Dowd] when an attempted ticket for broken brake lights seems almost certain to set them on a more romantic course.

As Maid of Honor, she only digs herself a bigger hole as the film progresses – a disastrous Brazilian meal; her antics on a flight to Vegas; her competition with Lillian’s new BFF, Helen [Rose Byrne]. It’s almost like she wants to sabotage herself. And when things finally reach the point where even her mother [Jill Clayburgh in her final role] thinks she’s hit bottom, she somehow makes things worse.

In and around the gross-out humor, though, is something else – an incisive look at female intrapersonal dynamics. From bottoming out Annie to overachieving Helen, to blunt, straightforward Megan [Melissa McCarthy], Bridesmaids is as much about love and communication between friends [long time and newly minted].

For all each moment that doesn’t work, there are three that do. But that’s not the real wonder here. That would be that a smart, funny film for women, written by women, got made in the first place. It may have been produced and directed by men, but make no mistake about it – Bridesmaid works because it doesn’t cave in to the male perspective. It’s not a work of genius, but it’s the funniest film so far this year – and will likely be the funniest film of the summer not titled The Hangover II [and, given the way sequels tend to go, even that’s not a certainty].