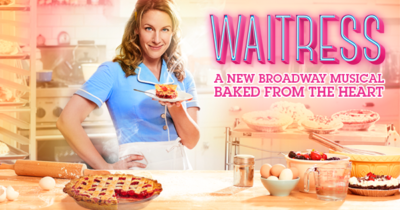 Sometimes life makes you feel like you’re stuck. Sometimes it’s your own choices that get you there – the people who spend your time with or the activities where you put your energy that leave you feeling like you have nowhere to go. Other times, it’s other people’s decisions that seem to trap you.

Once in awhile, it’s factors out of anyone’s control, and simply the twists and turns of happenstance. For Jenna, the main character in Waitress, it feels like all of the above. The various events that led her there aside, Jenna feels stuck – and Waitress is a musical about how people can move forward even when they don’t know exactly where forward is.

Jenna is a small-town waitress who just wants to make a name for herself baking pies. However, her circumstances aren’t exactly promising – her husband is an incredibly negative force in her life, and, when she finds out she’s pregnant, Jenna starts to think that where she is now is where she’ll always be. That is, until a baking contest is announced in a nearby county, and a kind, handsome doctor moves into town. Suddenly it seems as if Jenna might have a wait out of her current situation after all, and although other people’s decisions might have led to where she is, she’ll have to get herself where she wants to be.

Waitress is a heartfelt story of courage and determination, and a thoroughly feminist take on a woman’s place in her own destiny. Though cultural depictions of women’s stories have been shifting away from this trope for quite a while, the standard narrative around women in storytelling has, for a long time, centered mainly around things happening to women. In Waitress, however, Jenna is her own hero.

“It’s a story that’s beautifully feminist, but not in an up-the-middle, cliche way,” Sara Bareilles, Waitress’s songwriter and lyricist, told Billboard. Bareilles is most well-known for her hit songs such as Gravity, Love Song, and, most recently, Brave. This is Bareilles’s first foray into writing for the stage.

Bareilles is joined by writer Jessie Nelson, director Diane Paulus, and choreographer Lorin Latarro. This powerhouse creative team means that Waitress made Broadway history before it even premiered – the show marks the first time that a musical on the Great White Way has been led by an all-female team.

The show will star Tony-Award winning actress Jessie Mueller in the role of Jenna. Jessie is most well-known for her portrayal of Carole King in Beautiful, The Carole King Musical, which won her the aforementioned Tony, as well as a Drama Desk Award and a Grammy.

If you’re interested in seeing a touching and inspiring tale of how hope and determination make someone thrive even in the most difficult situations, Waitress is the show for you. Previews begin March 25, 2016, and the show officially opens on April 24, 2016. Get your tickets now and discover the power of courage for yourself.