Zombies are everywhere these days. There are even movies about zombies who ‘reform’ – Warm Bodies even turned them into a subject for a romantic comedy. That’s not quite the direction that BBC America’s miniseries event In the Flesh (part of the network’s Supernatural Saturdays, June 6-8, 10/9C) takes. Here, zombies can rehabilitated and rejoin society rather than remain unthinking, unfeeling, flesh-eating monsters.

In this dramatic variation on a theme, Kieran Walker is a reluctant zombie (or rather, a sufferer of Partially Deceased Syndrome) – reluctant because he committed suicide and doesn’t want to be undead – he’d rather be fully deceased.

Intrigued? Follow the jump for more details – including a look at the main characters.

END_OF_DOCUMENT_TOKEN_TO_BE_REPLACED 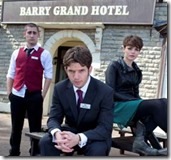 The original British Being Human’s final season and In the Flesh – a new take on the zombie drama – will be part of this summer’s continuation of BBC America’s Supernatural Saturday. Being Human will premiere on June 8th at 10/9C) and In the Flesh will debut on August 3rd at 10/9C.

In the Flesh takes the approach that zombies can be rehabilitated back into society and is centered on zombie teenager Kieren Walker who is reunited with his family after having committed suicide four years prior.

Being Human has ghost Alex beginning to find her feet in her new life after death with werewolf Tom, and vampire Hal is finally about to be unchained.

For complete series descriptions from the official press release, follow the jump. Both shows are BBC America co-productions.

END_OF_DOCUMENT_TOKEN_TO_BE_REPLACED

Supernatural Saturday is a hit for BBC America. Between The Doctor’s teaming up with the Woman Twice Dead MKIII, the clone sisters of Orphan Black and the geektastic talk show The Nerdist, the network claimed the top three social media trending shows of the night.

Check out the teaser for next week’s Orphan Black, then follow the jump to get the numbers for Supernatural Saturday’s debut.