Speed Racer was always one of my five wholly grails of films. Weirdly, I’ve never been that into the cartoon, but always thought it would make an amazing film. I was prepared to totally hate Speed Racer, everything that I saw of the film before I saw it sucked Chim Chim’s monkey balls which were then thrown in my face. The trailers were bad, the clips were amazingly stiff. Casting awful. CGI was crap. Clearly the directors/writers Wachowski‘s have lost their damn minds. Warner Brothers raped my childhood and I LOVED every psychedelic, trippy, vertigo induced minute of it. This movie capped off a fantastic film week that included Iron-Man and Son of Rambow. I liked Iron-Man a lot, but this is the movie that just punched me in the happy bone.  I had a smile on my face for days after the screening. Why did this work so well? In a word, despite the weird LSD induced colors this film was about something. It had a heart and soul to it. And I wasn’t expecting that in a summer blockbuster.  This movie is about family and love – of racing and each other.  Each race while fast, frenetic and colorful told the larger story. It wasn’t about just getting to the finish line as fast as you can.

From the opening graphics to the end closing credits the Wachowski’s nailed everything that was good about Speed Racer and elevated it to the 10th level. In a film like this the makers forget what was it about the original source material that drew people to begin with. For example in Mission Impossible two and three, they complete remade and destroyed the original, classic well known theme song. It’s a minor thing, but that theme is part of MI’s character. Just like in Speed Racer the classic theme is vital to maintaining the integrity of the show/film. Before I walked into the theater I saw an ad for that god awful Speed Racer cartoon on Nicktoons where they completely bastardized the original song. I thought for sure it would be used in the movie as well. The Brother’s W, not only kept the original theme but gave it this majestic orchestral score that put a huge grin on my face. They kept all of the musical beats from the series. Even the one modern version of the song that roles at the end credits is incredibly cool.

And that’s why this film was so great, they did a lot of nods to the original classic moments – The Monster Car, yep it’s there (doesn’t look so monster), Chim Chim and Spritle pretending to be a goon? Yep, it’s there. Speaking of Spritle, I’ve always hated those two in the cartoon, but here. They pretty much steal the film. Young Paulie Litt is at time hysterically funny. The way Racer X (Matthew Fox) is handled is perfect. I was actually fooled by the twist that really wasn’t a twist towards the end.  Emile Hirsch brings a certain charm to Speed. Some of his line delivery is stilted and emotionless. But the writing is so strong and enough is going on that you don’t notice it as much.  Speed Racer may not be Oscar worthy “best film,” but it’s the most fun I’ve had at a movie in years.  Every frame is infused with love and care. It’s an extremely rare A+. 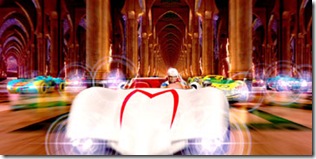 From writers/directors/producers Larry and Andy Wachowski, creators of the groundbreaking “The Matrix” trilogy, and producer Joel Silver comes the live-action, high-octane family adventure “Speed Racer.” Hurtling down the track, careening around, over and through the competition, Speed Racer (Emile Hirsch) is a natural behind the wheel.  Born to race cars, Speed is aggressive, instinctive and, most of all, fearless.  His only real competition is the memory of the brother he idolized—the legendary Rex Racer, whose death in a race has left behind a legacy that Speed is driven to fulfill. Speed is loyal to the family racing business, led by his father, Pops Racer (John Goodman), the designer of Speed’s thundering Mach 5.  When Speed turns down a lucrative and tempting offer from Royalton Industries, he not only infuriates the company’s maniacal owner (Roger Allam) but uncovers a terrible secret—some of the biggest races are being fixed by a handful of ruthless moguls who manipulate the top drivers to boost profits.  If Speed won’t drive for Royalton, Royalton will see to it that the Mach 5 never crosses another finish line. The only way for Speed to save his family’s business and the sport he loves is to beat Royalton at his own game.  With the support of his family and his loyal girlfriend, Trixie (Christina Ricci), Speed teams with his one-time rival—the mysterious Racer X (Matthew Fox)—to win the race that had taken his brother’s life: the death-defying, cross-country rally known as The Crucible.

Slated for release on May 9, 2008, “Speed Racer” marks the Wachowski brothers’ first writing/directing collaboration since “The Matrix” movies.  Joel Silver, who previously worked with the Wachowskis on “The Matrix” movies and “V For Vendetta,” is producing the film under his Silver Pictures banner.  Grant Hill, Andy Wachowski and Larry Wachowski are also producing, with David Lane Seltzer, Michael Lambert and Bruce Berman serving as executive producers.
The behind the scenes creative team includes director of photography David Tattersall, production designer Owen Paterson, editors Zach Staenberg and Roger Barton, and costume designer Kym Barrett.  The music is by Michael Giacchino. The screening will be held this Saturday at 10:30 AM in Tyson’s Corner, VA. If you want to go, click this link. For your chance to receive a complimentary pass to the SPEED RACER screening on Saturday, May 3, log on to www.gofobo.com/rsvp  and input the following code: ECLP2557 to download your ticket.

I’m not sure what to think about E! footage from the set of Speed Racer, it looks incredibly cheesy, but film set visits always look crummy. So with that said, “Go Speed Racer, go Speed Racer, Go! Adventures waiting just ahead!” Take a gander at this.

And in case you missed it, here’s a full look at the Mach Five.