The new season of Sons of anarchy premieres on Tuesday, September 11 (FX, 10/9C), but FX has a little something special planned for the evening – a live chat (FXNetwroks.com, 9ET/8C/6PT) hosted by Russell Brand and featuring the show’s creator, Kurt Sutter, and members of the cast.

END_OF_DOCUMENT_TOKEN_TO_BE_REPLACED

Based on the Broadway musical, a small town girl and a city boy meet on the Sunset Strip. Both have dreams of singing careers while paying their dues working at the most famous rock club in LA. But when the city boy gets his big break, it threatens their love. 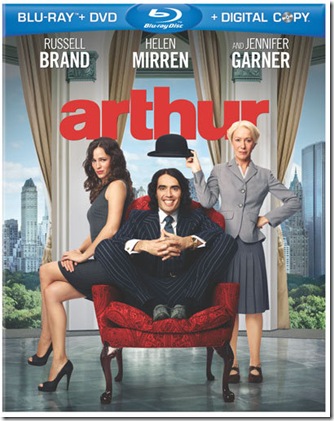 According to the press release that came with the ‘Arthur’ product, the bold claim is made that “Russell Brand reinvents the role of loveable billionaire, Arthur Bach”. That is pretty much true. The problem is, the ‘reinvention’ creates a character that is not as loveable as the one from the original ‘Arthur’. That’s not to say I have anything against Russell Brand, I think he is fairly talented. It’s just that the 1981 version of  ‘Arthur’, which starred Dudley Moore in the title role, was such a gentle, funny and at times very poignant movie that it’s hard to see this remake as being as endearing as the original.

The Russell Brand version of ‘Arthur’ has a lot of the same plot elements as the original. The title character is still an irresponsible child/man who relies on his limitless fortune and a life long personal servant who keeps him out of trouble. Arthur still finds himself facing the dilemma of choosing between an arranged marriage to ambitious corporate exec Susan, played by Jennifer Garner, and being able to keep his fortune. Or he can marry Naomi, played by Greta Gerwig, who is the woman he truly loves. Marrying Greta would mean losing his fortune.

END_OF_DOCUMENT_TOKEN_TO_BE_REPLACED 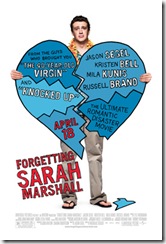 Forgetting Sarah Marshall is doomed to be remembered as “that naked break-up movie” though it’s considerably more. For one thing, the naked break-up is a simultaneously funny and poignant scene and Jason Segel’s performance as Peter [the breakee] is staggeringly vulnerable. For another, that vulnerability continues to come into play when Peter tries to get away from it all at the same Hawaiian resort where Sarah [Kristin Bell] is staying with her rock god boyfriend. In turn, Peter’s heartbreak is tempered by Rachel [Mila Kunis], a pretty, intelligent hotel employee who has also had a miserable heartbreak.

Segel‘s script meanders a bit, but those wanderings lead to emotional payoffs that make sense – especially when news that the TV series that stars Sarah, and for which he composes the “dark, ominous tones,” has been cancelled. A comment from Rachel leads Peter to finish his dream project [a rock opera for puppets – about Dracula and his search for True Love], while Aldous’ [the rock god, played by Russell Brand] behavior has Sarah rethinking leaving Peter.

Director Nicholas Stoller keeps the wandering script focused and gets terrific performances from his entire cast. Check out supporting work by the reliable Paul Rudd [as a goofy surfing guru] and Jonah Hill as Aldous’ number one fan. Stoller understands the necessity for an extra beat in a quiet moment and how to set up a gag without being obvious. As a result, Forgetting Sarah Marshall is one of the best films to come out of the Judd Apatow crude-with-a-heart comedy factory. I may not have laughed as often as the lady behind me, but I did laugh and smile and chuckle enough to recommend Forgetting Sarah Marshall as more than your daily recommended dose of fun.