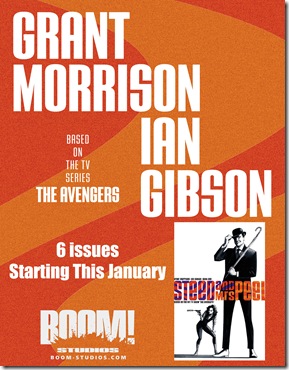 Details are scant but BOOM Studios – home to comics adaptations of such top franchises as Farscape and The Muppets – has acquired a six-issue miniseries based on the British hit series The Avengers.

Written by Grant Morrison [a leading force behind DC Comics’ recent reboot] and drawn by Ian Gibson [Judge Dredd, The Ballad of Halo Jones], the miniseries presents new adventures of The Avengers most popular duo, John Steed and Mrs. Emma Peel. The miniseries premieres in January, 2012.

Beyond the featured poster, though, that’s all we know, but as a longtime fan of the British Avengers, I’m hoping for something wonderful here.