Tickets for America Salutes You are now on sale.

America Salutes You will be broadcast nationally on Tribune Broadcasting, Sinclair Broadcasting Group, Graham Media Group stations and Ion Television. Westwood One will carry the concert on radio and stream online at LiveStream, Military.com and TV Worldwide.

Read on for further details.

END_OF_DOCUMENT_TOKEN_TO_BE_REPLACED 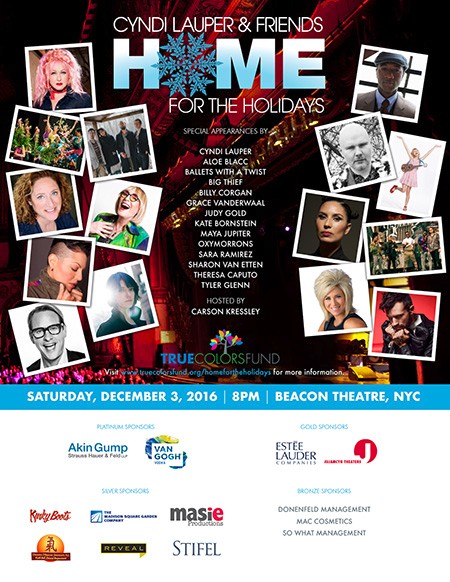 The 6th Annual Cyndi Lauper & Friends: Home for the Holidays Benefit will be held at New York’s Beacon Theatre. The benefit raises funds and awareness for homeless LBGT youth.

Hosted by Carson Kressley, this year’s line-up includes such acts as Big Thief, Ballets with a Twist, Billy corgan and many more – including Cyndi Lauper, herself.

The 6th Annual Cyndi Lauper & Friends: Home for the Holidays will be held on Saturday, December 3rd. Follow the jump for further details.