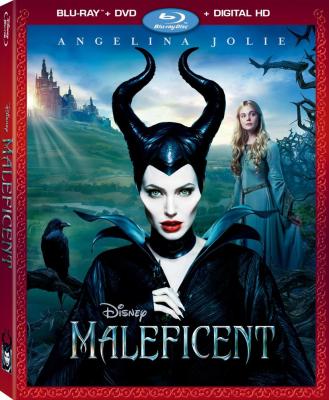 Maleficent got a prick and fell asleep at the Box Office, will the Blu-ray release wake up the sales? Ok, I tried my best a clever metaphor and failed. What can you do? Maleficent is now available on all your home video platforms.

I don’t know, I just don’t know. Believe it or not I’ve never seen Sleeping Beauty, it is one of my secret movie shames now made public so I can’t say that I have a particular affinity towards Maleficent. What I am tired of is this trend towards making villains sympathetic by giving us their backstory. Was anyone really clamoring to know why one of Disney’s most famous evil doers went bad?

Dressed in all black, with weird cheekbones, and big black wings and long black horns (which didn’t quite work) Angelina Jolie is weirdly radiant as title character. She oozes charm, but never the menace that the character requires and there’s a reason for this. There’s a fine line between telling the Villain’s story to make them sympathetic to castrating them.

Maleficent happily dances across the line and completely rewrites the story – as the voiceover at the end says “The story we’ve heard all these years has been wrong.” There’s a particularly brutal moment early on where you know that no matter what Maleficent does from that point onward is completely justified. What was done to her was borderline “rape.”  And therein lies the central problem with this film, the only two sympathetic characters in the entire thing are Maleficent and Aurora (Elle Fanning).

The cast was interesting, Elle Fanning has become quite a nice young actress. She doesn’t do much here, but she does work well with Jolie. I actually bought their relationship and you could see Maleficent slowly falling for this baby that she cursed as she steps in and practically raises her when she quickly realizes the three faeries charged with her care are too incompetent to do so.

Sharlto Copley was an interesting choice to play King Stefan, his performance doesn’t carry much weight to it. I never once felt like there was chemistry between the two. A lot of time is spent early on building up the fact that Maleficent and Stefan were childhood friends, who became lovers. The setup was beautifully done and executed, but everything felt forced and abrupt once the story did a flash forward to their adulthood. The movie became all about Angelina Jolie.

When the King attacks Maleficent’s home and starts a blood feud with her, there’s no justification given other than he was scared of the fae land and he wanted their resources. I guess that’s enough justification to go to war. So when the King offers up his Kingdom to anyone who can destroy Maleficent, Stefan sees his opportunity. But in the real world would a King, even if he is dying, turn his Kingdom over to some stranger he doesn’t even know – a servant on top of that? I never quite got past that idea. The problem with vanity pieces like this is once Angelina comes on, all momentum and every scene centers around her. She sucks the air out of everything else.

Robert Stromberg, best known as the Visual Effects guy for the Pirates of the Caribbean, Shutter Island, Boardwalk Empire and a host of others, gets his first shot at taking over the big chair. Being a first time Director is difficult enough, but taking on such a high profile, big budget project like this wasn’t for the weak of heart. However the choice is actually a no brainer when you consider his previous visual effects work and Maleficent is certainly a SFX laden film.

All the trailers for this film showcased all the darkly lit and shot sequences, so there was no way I was going to see this in 3D. However, dark it may have looked, there are some sequences in the Fae land that do look beautiful, the creature work was a bit underwhelming and uninspired.

While I enjoyed this film as a stand alone feature, I couldn’t help wonder who is this movie for? Sleeping Beauty fans and purist are likely to be upset by how far they go into turning Maleficent into the actual hero of their favorite story, thus ruining their fond memories of the beloved franchise and I can’t see this appealing to non Sleeping Beauty fans.

There’s not much to say here, it’s a modern film so the Blu-ray letter boxed transfer is about as sharp and clean as you would expect it to be and audio quality of the Dolby Digital HD track is flawless. Packaging is basic and the on-screen navigation simple and easy to use.

Have I said lately how much I really like Disney Movies Anywhere push? Their digital app is great and includes all the extras from the Blu-ray disc. The only problem is there are no native Disney Movies Anywhere Apps for the TV – ie no Console, Apple TV or Roku apps yet. I do love that Disney provides a digital copy for both UltraViolet and iTunes (with iTunes Extra).As far as featurettes it’s pretty sparse.

I enjoyed the movie a lot more this time around. This is not a bad release, but it feels a bit uninspired. Have I said lately how much I really like Disney Movies Anywhere push? Their digital app is great and includes all the extras from the Blu-ray disc. The only problem is there are no native Disney Movies Anywhere Apps for the TV – no console, Apple TV or Roku apps yet. I do love that Disney provides a digital copy for both UltraViolet and iTunes (with iTunes Extra).