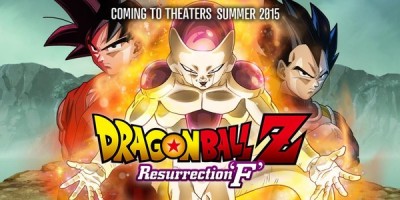 FUNimation has announced that the world premiere of Dragon Ball Z: Resurrection ‘F’ has been set for April 11th at the Egyptian Theater in Los Angeles, CA. The premiere will be in Japanese with English subtitles.

Dragon Ball Z: Resurrection ‘F’ will then premiere in Japan on April 18th before it opens in North America later this summer. For further details, follow the jump.

World Premiere to Be Held April 11, 2015 at Egyptian Theatre in Los Angeles, CA

FLOWER MOUND, TEXAS – March 16, 2015. FUNimation Entertainment is proud to announce today its distribution of the theatrical, home entertainment, video on demand and broadcast rights to the upcoming Japanese animated feature film Dragon Ball Z: Resurrection ‘F’. Dragon Ball will be released by Toei in association with Fox International Productions in Japan on April 18, 2015.

Some fans of the franchise won’t have to wait until the summer to see the film, though. FUNimation Entertainment and Toei have teamed up with Fox International Productions & Toei Animation to host the world premiere of Dragon Ball Z: Resurrection ‘F’ (in Japanese w/ English subtitles) at the Egyptian Theatre in Los Angeles, CA on Saturday, April 11. This premiere will be also held to promote the April 18 release of the movie in Japan.

“We are honored to host the world premiere of Dragon Ball Z: Resurrection ‘F’ here in the United States,” said Gen Fukunaga, CEO and President of FUNimation Entertainment.  “Based on last year’s fan response to Battle of Gods, I have no doubt that audiences will enjoy this eagerly anticipated sequel.”

Fans in the Los Angeles area can be among the first in the world to see Dragon Ball Z: Resurrection ‘F’. A limited amount of tickets to the premiere were made available to fans and the general public on March 15, 2015 at www.dragonballz.com.

Dragon Ball is one of the most beloved anime franchises of all time, and this acquisition represents the ongoing partnership between FUNimation Entertainment and Toei Animation.  Together they have delivered the Dragon Ball brand to fans in North America for over 20 years.

FUNimation® Entertainment is the leading anime company in North America. FUNimation has a proven formula for launching and advancing brands. They manage a full spectrum of rights for most of their brands including broadcasting, licensing, production, Internet, and home video sales and distribution. For more information about FUNimation Entertainment and its brands, visit www.funimation.com .

About Toei Company Ltd. Toei Company Ltd., since its foundation in 1951, has been supported by a broad range of fans for over half a century. The company focuses on providing high quality, comprehensive entertainment through the production of theatrical movies, TV dramas, direct-to-video productions, and anime, as well as a diverse range of businesses based on film production.

About Toei Animation Co., Ltd. With headquarters in Tokyo and sales offices in Paris, Los Angeles, Hong Kong and representative office in Shanghai and Taipei, Toei Animation (Jasdaq: 4816) ranks amongst the world’s most prolific animation production studios. Toei Animation‘s operations include animation development and production, and worldwide marketing and program licensing. Since its founding in 1956, Toei Animation has produced more than 10,000 episodes of TV series (more than 200 titles) and more than 200 long feature films.