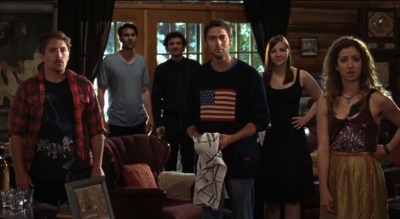 “An ode to the consoling power of deep, abiding friendships.” – San Francisco Chronicle

“Stunning in its simplicity, but also ovation-worthy in its visual audacity.”

Blending 16mm, Super 8mm & Lowell’s own B&W photography, Beside Still Waters received overwhelming support from its innovative Kickstarter campaign, where it quickly became the 13th most-funded narrative film of all time, and the only one of the top 100 to more than triple its goal, which was surpassed on the second day of a month-long campaign.

Winner of both the Jury Prize and the Audience Award at the 2013 Austin Film Festival, Beside Still Waters is about Daniel Thatcher (Ryan Eggold), a young romantic who has recently fallen on hard times, who enlists his childhood friends to relive the glory days of their youth, whether they like it or not.

Born and raised in Atlanta, GA, Chris Lowell studied film production at the University of Southern California before continuing his studies at the New School. He has had great success in his acting career, performing in Oscar nominated films (The Help, Up in the Air) and award winning TV shows (Private Practice, Veronica Mars). Chris is also an alumnus of the highly respected Sundance Labs. Audiences recently saw Chris on the FOX comedy Enlisted and the Warner Bros. film Veronica Mars. He is currently in rehearsals for his theatrical debut at Ars Nova in the upcoming play Jacuzzi. In addition, Chris has built a successful career as a fine art photographer. His work is included in the Elton John Collection and the Sovereign Collection. His most recent exhibit “Thirty-One Days” recently opened at the Jackson Fine Art Gallery. As a writer, Chris’ first screenplay, The Bridgewater Umbrella was a finalist for the Sundance Screenwriter’s Lab.

Tribeca Film is a comprehensive distribution label dedicated to acquiring and releasing independent films across multiple platforms, including theatrical, video-on-demand, digital, home video and television. It is an initiative from Tribeca Enterprises designed to provide new platforms for how film can be experienced, while supporting filmmakers and introducing audiences to films they might not otherwise see. Current and upcoming Tribeca Film releases include Gia Coppola’s Palo Alto, David MacKenzie’s Starred Up, Alex Ross Perry’s Listen Up Philip, and the documentary Nas: Time Is Illmatic.