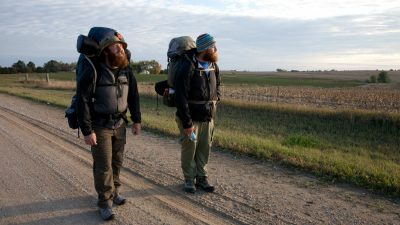 Veteran suicides reached epidemic proportions in recent years,  with many deaths blamed on  “moral injury”—the result of transgressing deeply held beliefs during wartime. “Moral injury” is an evolving diagnosis without a fixed treatment plan. Veterans must often find their own way.

Iraq veterans Tom Voss and Anthony Anderson, haunted by combat experiences, decided to distance themselves from their demons by taking a  2,700 mile walk from Milwaukee to Santa Barbara, seeking redemption, acceptance and a way to close the deep moral chasm opened by war. That trek is the centerpiece of Almost Sunrise, a new film by director Michael Collins and Producer Marty Syjuco, whose Emmy-nominated “Give Up Tomorrow” aired on PBS in 2012. Almost Sunrise debuts on POV and all streaming devices Monday, November 13, 2017 at 10 p.m. (check local listings).

The film defines moral injury as “a wound to the soul inflicted by violating one’s own ethical code.” These wounds often result from unexpected situations over which a soldier had no control, including “collateral damage” and civilian casualties.

Tom Voss came from a military family and joined the Army at age 19. He was deployed to Iraq from 2004-2005. “You really don’t know anything about war,” he says.  “You’re naïve about the whole process.”  Yet soldiers often experience searing events that transform their lives, though the effects often do not reveal themselves until they return home.

Anthony Anderson did two tours in Iraq, and like Voss experienced mental anguish after his deployment ended. “I had a hard time getting out of bed in the morning. I was breaking down.” Both men experienced sleep disorders, chronic anger, and suicidal thoughts. Alcohol and prescription drug abuse added to their problems.
Voss finally had enough. “I needed to do something to help myself. I needed to take a stand.” He decided the walk – which would help raise funds for a Milwaukee veteran gathering place—would help him come to grips with his wartime experiences. Anthony, who had also concluded that his survival required drastic action, agreed to join him.

The hike was no stroll in the park. Massive blisters, snow and a blazing sun were accompanied by constant mental replays of what Voss and Anderson call their “deployment reel”—memories of combat experiences brought vividly to life in graphic detail. As they walked, they kept a blog, maintained a social media presence, and read emails from supporters and veterans encouraged by their example. They also followed the news. Some 22 veterans were killing themselves each day.

There are lighthearted moments. Anderson’s shoes, which had produced significant blisters, were gleefully blown up during one stop. A church group, led by a man dressed up like Abraham Lincoln, sponsored a dinner attended by local supporters. Along the way, people stand at attention, salute, and thank the walkers for their service. “No problem,” they reply, without losing a step. When they finally approach Santa Monica a bystander asks “where you guys walking from?” When they answer “Milwaukee” he replies, “I think you made a wrong turn.”

But the film seldom strays from the serious subject of moral injury. Tom’s girlfriend Katinka, interviewed several times, offers her own explanation for the delayed response to wartime horrors. When Tom and other soldiers went to war, she says, they “didn’t know what love was.” After returning and starting serious relationships and families, they had to face the fact that “I terminated all that love and all those people’s lives,” she says. “What an awful thing to live with.”

A priest named Father Keating, who works with veterans suffering from moral injury, calls it a “raw primitive feeling”—the knowledge that “I did something wrong.” Healing requires that the soldier admit that, “yes, I did this.” A sense of forgiveness is also key to recovery. Tom sums up the spiritual nature of the inner conflict. “How can a just God let humans do this to each other?”

Their search for spiritual healing takes them to a Native American spiritual leader named Wolf Walker, who counsels them at Colorado’s Garden of the Gods, one of many spectacular settings captured by the filmmakers.  And eventually the miles work some wonders. Anthony explains that when his daughter was born “I didn’t feel anything. Now I do, and I’m antsy to get home.”
Yet Tom’s troubles persisted after returning home. Katinka says

Tom was “still holding everything in.” He would eventually seek help at a facility outside of Aspen, where Father Keating and intense meditation techniques helped him achieve the peace he had been seeking.  He also affirms that he has become drug and alcohol free.

The filmmakers hope the film will raise awareness of moral injury, and contribute to the reduction of veteran suicides. “We bring our passion for impact, awareness and action to an engagement campaign that ignites this timely and much needed international dialogue around mental health, healing and war,” Collins says.

“The broadcast appropriately follows Veteran’s Day this year,” said Justine Nagan, executive producer/executive director of POV/American Documentary. “After grueling tours in conflict zones, it can be difficult to return home whole. Tom Voss and Anthony Anderson’s incredible journey shows what it takes to remember, reflect on and reconcile with traumatic pasts. They also reveal our nation’s ongoing shortcomings in helping veterans heal. With great humanity, Almost Sunrise raises the important issue of our veterans’ mental health after returning home and offers hope and suggestions for healing.”

About the filmmaker:
Michael Collins, Director/Producer
Michael is an Emmy® nominated filmmaker and the founder of Thoughtful Robot Productions. In 2005 he directed CAUGHT IN AN INJUSTICE, a one-hour documentary broadcast on Spanish national television that received Special Mention at the 15th International TV3 Actual Awards. Michael’s short film, GERTHY’S ROOTS, won the Belief Matters Award and was selected for the Media that Matters collection. In 2011 he completed GIVE UP TOMORROW, his documentary feature film seven years in the making. The film premiered at the Tribeca Film Festival and won the Audience Award and a Special Jury Prize for Best New Director. The film went on to screen in over 80 festivals in 40+ countries, winning 18 major awards. Recently GIVE UP TOMORROW was selected for the Britdoc Impact Award and was nominated for an Emmy® Award for Outstanding Investigative Journalism.

Marty Syjuco, Producer
Originally from the Philippines, Marty moved to NYC in 2000 and worked in film distribution at Focus Features. In 2005, his first film ATRAPADO EN LA INJUSTICIA was broadcast on Spanish national television. He later developed it into the feature-length documentary, GIVE UP TOMORROW. The film was an ITVS co-production and commissioned by Nick Fraser for BBC’s Storyville, with support from Sundance, CAAM, Tribeca, Fledgling Fund, Good Pitch, BRITDOC and Bertha Foundation, among others. The film has reached millions thru broadcasts around the globe, including on the BBC, DR, SVT, Planète, Canal+ and on PBS, as part of POV’s 25th anniversary season. In addition to being nominated for an Emmy® Award for Outstanding Investigative Journalism, GIVE UP TOMORROW received recognition from the Grierson British Awards, Cinema Eye Honors, Amnesty International’s Media Awards, and the Britdoc Impact Awards.