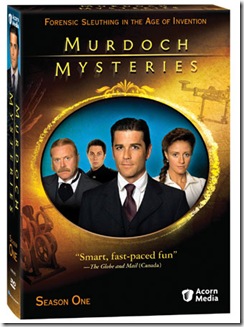 Detective William Murdoch [Yannick Bisson, Sue Thomas F.B.Eye] is an enthusiastic fellow who integrates science into his investigations, to the exasperation of his boss, Inspector Brackenreid [Thomas Craig, where the Heart Is], an old school copper who is by the book at a time when “by the book” was the judicious use of violence coupled with the concepts of motive and opportunity. Murdoch’s usual assistant in his investigations is Constable George Crabtree [Jonny Harris], an equally eager, if not quite as bright sidekick who finds Murdock’s methods worse pursuing.

Dr. Julia Ogden [Helene Joy, Durham County] is the pathologist who operates the city’s morgue and, as a free thinking woman in a position that requires clear thinking and scientific analysis [for all that is a science in throes of birthing], is a natural foil and/or confidante for Murdoch.

The first season of the series found Murdoch investigating, among other things: the death of a woman who was helping demonstrate the efficacy of alternating current; the shooting death of a black boxer; a murder that seems to have committed by his drunken father, and even the death of a well-known philanthropist who may have had a particularly abhorrent dark side.

Over the course of the season, Murdoch also encounters historical figures like Sir Arthur Conan Doyle [twice], Nikola Tesla and even a visiting royal personage. Throughout, the series is smart and offers a cast of interesting characters – none of whom are buffoons – working on original and intriguing cases.

Behind Murdoch’s investigations are some very solid B-arcs, too. In the season’s first episode [originally planned to be aired ninth until it became clear it would be the most effective introduction to the characters], while Murdoch investigated the death of Miss Toronto Electric & Light by electrocution, George is beginning a tentative relationship with a woman who was at the exhibition to protest the use of a dog that was to be used to show the dangers of electricity.

There’s also a lovely undercurrent of possible romance between Murdoch and Dr. Ogden. Though their relationship is professional, they – as series showrunner Cal coons notes – inspire each other, and really get each other. They often seem to know exactly what the other is thinking.

Of course, some of the techniques Murdoch cobbles together weren’t actually invented until much latter, but the actual procedures are accurate – like the manner in which phone calls were originally traced. But that’s part of the fun and the conceit works partly because of the consistently intelligent writing and partly because of the engaging cast who become these interesting and relatable characters.

Grade: Murdoch Mysteries: Season One – A-