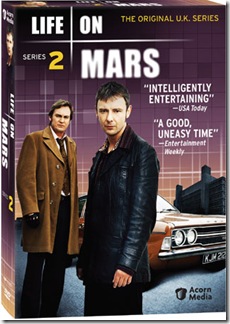 Series two begins some time after the seeming cliffhanger that closed series one [seriously, he had a choice between jumping off a tall building  or going back to the station with WPC Annie Cartwright; which would you choose?]. The case Hunt’s crew is working on is tracking a series of nasty killings and there are indications that casino owner Tony Crane may somehow be involved. Oddly enough, since Tyler had been after Crane in 2006, he’s determined to get the younger Crane by any means necessary- including Hunt’s down and dirty methods. It’s a bang-up start to the final series of the show, make no mistake.

The final eight episodes of Life on Mars follow Tyler as he discovers that his mentor in the future is a bit disappointing [mirroring a later ep, where Hunt discovers the same about his personal hero/mentor]; deals with a bomb threat that he knows can’t be IRA; and even gets to select the station’s newest detective.

Throughout, he is haunted by the Test Pattern Girl; communications from the future via radio and television; the simmering enmity of fellow detective Ray Carling [Dean Andrews]; his growing feelings for Annie [Liz White], and crimes ranging from straightforward murders to potential hate crimes and drugs. The more he becomes comfortable in his new life, the more he is haunted by his 2006 life.

As with series one, the writing in series two is continually excellent and the cast fills their roles with an assurance that looks easy but must have been anything but. Though all eight eps are downright brilliant, a couple stand out for me: episode five, in which the incredibly sick Tyler has to solve an old murder case to prevent a bitter former military man from killing hospital personnel he’s taken hostage [the animated teaser is amazing!]; and the two-part series [and show] finale in which he becomes convinced that Hunt is really a brain tumor and that, if he can only get Hunt put away, he’ll wake up.

According to series writers/co-creators Mathew Graham and Tony Jordan, the series reaches a definitive ending, but from where I sit, that’s not entirely case – except to say that Sam makes a final choice that feels right.