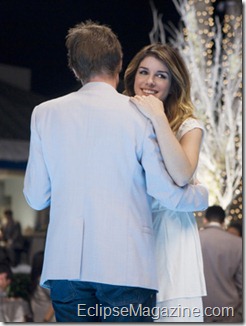 It’s been a few weeks since I last did a 90210 Re-cap because frankly I got tired of complaining about a show that was awful and the new V momentarily caught my attention – I’ll be glad when I get home back to my Tivo. With no V on, I tuned back into the show last week and thought it was a fantastic installment, Jen finally got what was coming to her, Dixon (Tristan Wilds) and Annie (Shenae Grimes) finally got back together and are acting like Brother and Sisters again, in that one episode they fixed so many things that I complained about during the first 7 episodes. Everyone is back to being likable. We have nice guy Dixon, nice girl Annie, Naomi is still Naomi. Tonight we get the last episode before their long winter break.

Navid is (Michael Steger) is determined to prove that Jasper (Zach Sherman) – remember my earlier posts calling him Beady Eyed Creepy boy? I was RIGHT! I may have been wrong on my other creepy boy Scott on Gossip Girl (but the season isn’t over yet) but I was right on this one. Navid asks Adrianna (Jessica Lowndes) to report B.E.C.B. But she can’t because it would violate her probation.

Meanwhile the mean girls Silver (Jessica Stroup) and Naomi (AnnaLynne McCord) continue to snub Adrianna because her recent drug use has made a bad friend – you don’t cross the mean girls. Naomi pleads with Annie to be her friend again and Annie rightly tells her to talk to the hand. Teddy (Trevor Donovan) loves Silver and pulls out all the stops to win her over including a public proclamation of his love for her but she smartly tells him talk to the hand. Lot’s “talk to the hand moments” tonight, ok there’s only these two moments.

There’s a really good, long overdue talk between Dixon and Debbie (Lori Loughlin) where he reaffirms that she is his mother. I loved this moment, but it’s a bit ruined at the end where bad boy Dixon rears his head again by a) hooking up with Silver again, even though he knows that Teddy really does have feelings for her, he tells her she can do better than Teddy and b) he goes home and tells Debbie that he really needs to talk to his birth mother – which is a WTF moment after everything he shared with Debbie to say that.

The group have an intervention for Annie to try and convince her that Jasper is a drug dealer, at first she doesn’t believe them – why should she considering the way they kicked her to the curb at the beginning of the season? With friends like these, you don’t need enemies. Adrianna stands up and says that Jasper was her dealer and that she’s going to come forward regardless of the consequences. Annie storms out. Navid tells A not to do it, he’ll find another way and the Mean Girls welcomes Annie back into the fold. Naomi and Liam get back together.

Episode ends with B.E.C.B. confronting Annie and she telling him she doesn’t want to see him again, then he admits, what I’ve been saying all along, that the little creep knew Annie ran over his Uncle. And that my friends is all until who knows when.

I loved last and this week’s episodes of 90210 it feels like a completely different show. The acting was definitely better, all the characters felt more real and 3 dimensional, they were no longer being mean for the sake of being mean. There were a lot of nice little moments, mostly involving Dixon, like Dixon and Silver and Dixon and Debbie. I liked seeing Naomi grovel before Annie and also liked that Silver turned Teddy down after the big public display. I’m back on board, assuming I remember to watch it when it returns in who knows when. I still don’t like Liam. Have I said recently how much I despise these 3 and 4 month breaks The CW loves to use for their shows? It ruins all momentum and interest.