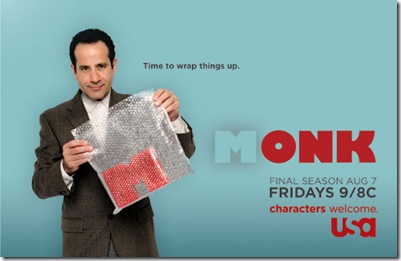 Adrian Monk found his late wife Trudy’s killer in the two-part conclusion to USA’s eight-season wonder, Monk. Then, after a bit of pondering his wife’s killer’s last words, he discovered that Trudy’s daughter was still alive. [That won’t make sense to anyone who hasn’t followed Monk, but this column isn’t for you, anyway.]

In a finale full of revelations, departures and arrivals, the one thing that kept Monk from losing it completely was removed from his life – and he discovered that he didn’t that fixation to keep living his life in a productive – if unorthodox manner. The final montage of the series followed Monk and Natalie, Captain Leland Stottlemeyer and new police chief of Summit, New Jersey, Randy Disher as they went to work. Not quite business as usual, but a more than reasonable facsimile.

When USA aired the premiere of Monk, Mr. Monk and the Candidate, it drew an audience the likes of which cable had not see before. Sure there had been original cable series – USA’s own Swamp Thing and the vastly underrated Superboy among them] – but they hadn’t drawn flies, relatively speaking. Monk changed that.

Maybe it was because the casting was so perfect – Tony Shalhoub took home three Emmys for the role – or maybe it was because there had never been such an odd duck as the central character of a detective series before. Maybe it was both. Before long, two of the Big Four networks [ABC and NBC] had repurposed the series to respectable ratings, showing that whatever had inspired Andy Breckman to create an OCD [Obsessive Compulsive Disorder] suffering detective, he had combined a great concept with a great cast – one that not only made inroads in the realm of respectability for cable, but set the model for USA’s whole Characters Welcome approach to programming. It’s safe to say that, without Monk, there’d be no Psych, no Burn Notice, no White Collar.

I didn’t watch every ep of Monk when it aired, but I’ve seen them all through reruns, the ABC and NBC runs and DVD rentals so I know it’s not entirely accurate to say that I’ll miss him now he’s gone. Thanks to the number of platforms available, like Monk 1.0, Sherlock Holmes, Monk will probably be around forever. 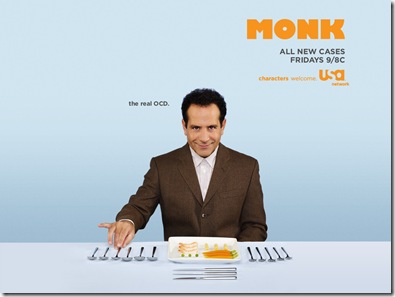 Why did I watch? Well, mostly because, in the past, OCD sufferers were the butt of the joke in movies and on TV – or the reason for many tears and much garment rending. Monk was the first place I saw a character with OCD who was a rounded character. Adrian Monk may have had more neuroses, phobias and compulsions than any one person should have to deal with, but he was able to function after a fashion with the aid of his nurse Sharona, and later with his assistant, Natalie. And when he was on the job, all his various obsessions enabled him to see what other investigators would miss – and put those bits and pieces together in a way that almost seemed magical until he explained them.

When USA let it be known that this was to be Monk’s last season, I wondered if solving Trudy’s murder would benefit him – or if, rather, losing that driving need and focus would cause him to spin off the rails. It seems that series creator Andy Breckman had considered that possibility before electing to have Monk carry on. There’s a moment in the final episode where his psychiatrist asks him how he feels and he replies, “I feel empty.” Fortunately, that feeling is fleeting and Monk goes on to discover that the daughter Trudy thought had died had actually been taken away and put up for adoption – giving him, as Natalie put it, a gift from Trudy: someone to love [well, someone else – we all knew that Monk loved Sharona and Natalie; he plunged into a sewer to help Sharona and faced equally torturous experiences for Natalie – just as we knew that none of them would ever pit it in those exact words].

So, there will be no new cases for Adrian Monk and, since I’ve seen every episode, I will miss him now that he’s gone. And yeah, I didn’t expect it, but I wept when Randy Newman sang over that final montage [really didn’t expect that to happen…].

Thank you to: Andy Breckman and the writers of Monk for maybe not always coming up with the most difficult of mysteries, but always finding the right balance for Monk as a character [the latter being infinitely more important than the former] and to the cast of Monk: the inimitable Tony Shalhoub, Bitty Schram, Traylor Howard, Ted Levine, Jason Gray-Stanford, the late Stanley Kamel and Hector Elizondo for bringing life to the writers’ words.

It’s nice to know that Adrian and Natalie are out there solving murders and helping Captain Stottlemeyer bring the perpetrators to justice.