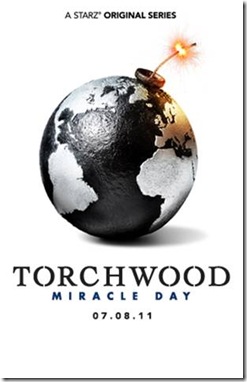 The first official trailer for the fourth season of Torchwood – Torchwood: Miracle Day – has gone live on the Starz.com website. Here’s the link: http://www.starz.com/extras#/torchwood-miracle-day-teaser.

The US installment of the BBC smash hit series will star Mekhi Phifer (“ER,” “Lie to Me”), Bill Pullman (Independence Day, The Grudge) and, in an extended guest role, Lauren Ambrose (“Six Feet Under,” The Other Woman) and is currently in production in Los Angeles. Bill Pullman, who portrays Oswald Danes, a former school teacher and convicted child killer, and Phifer, join “Torchwood” alumni John Barrowman (Capt. Jack Harkness) and Eve Myles (Gwen Cooper) in the series. Also joining the cast are Alexa Havins (When in Rome, Fat Girls) as Esther Drummond, a deskbound CIA employee who dreams of active duty and who suddenly finds herself running alongside Jack, Gwen and Rex; and Arlene Tur (“Crash,” Eat Pray Love) as Dr. Vera Juarez, a Washington D.C. surgeon, who finds herself on the frontline of medical care on “Miracle Day” advising the government think-tanks on the best course of action for the world’s population.

Torchwood begins with a day when nobody dies. All across the world, nobody dies. And then the next day, and the next, and the next, people keep aging, they get hurt and sick, but they never die. The result: a population boom, overnight. With all the extra people, resources are finite. It’s said that in four month’s time, the human race will cease to be viable. But this can’t be a natural event – someone’s got to be behind it. It’s a race against time as C.I.A. agent Rex Matheson investigates a global conspiracy.  The answers lie within an old, secret British institute. As Rex keeps asking “What is Torchwood?," he’s drawn into a world of adventure, and a threat to change what it means to be human, forever.