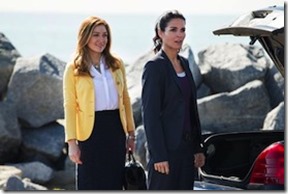 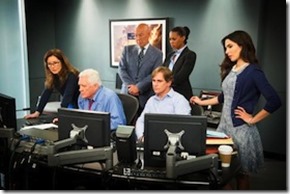 For Rizzoli & Isles it will going into its fifth season; both Major Crimes and Perception will be in their third seasons. Falling Skies was previously given a fourth season order. For more details, the official press release follows the jump.

TNT has renewed three of its hit summer series, including the top-ranked Rizzoli & Isles and the Top 10 dramas Major Crimes and Perception. The renewals join the previously announced fourth-season order of TNT’s epic drama Falling Skies, one of the summer’s most popular dramas with key demos.

“TNT has had a terrific summer with four big hits that have drawn viewers with great storytelling, engaging characters and outstanding performances,” said Michael Wright, president, head of programming for TNT, TBS and Turner Classic Movies (TCM). “With the renewals of Rizzoli & Isles, Major Crimes, Falling Skies and Perception, TNT has built an incredibly strong arsenal of scripted series. And it’s only going to get stronger with the addition of Mob City and the return of Dallas this winter, not to mention the debuts of The Last Ship and Legends next summer.”

TNT’s Major Crimes will return for a third season. The hit crime-drama, which currently ranks as one of basic cable’s Top 5 series, is drawing more than 6.7 million viewers in Live + 7 delivery. The show is also one of basic cable’s Top 10 summer dramas among adults 25-54 (2.1 million). Currently airing Mondays at 9 p.m. (ET/PT), Major Crimes is set to wrap up its summer run Aug. 19. It will return in November for the second half of the season. TNT has ordered 15 episodes for season three, which is slated to begin in summer 2014.

TNT has ordered a third season of its hit series Perception. In its second season, Perception is averaging 5.6 million viewers in Live+7 delivery, with 2.0 million adults 25-54 and 1.5 million adults 18-49 in Live + 7 delivery. It ranks as one of basic cable’s Top 10 summer dramas with total viewers and adults 25-54. Perception is slated to end its summer run on Aug. 27, returning in early 2014 for the rest of its second season. TNT has ordered 15 episodes for season three, which is expected to launch in summer 2014.

After delivering a sizzling summer lineup, TNT is ready to keep the fire burning with new and returning scripted dramas. Heading up the list of new shows is the eagerly anticipated series event Mob City, from executive producer Frank Darabont (The Walking Dead). The powerful drama about the epic battle between Los Angeles Police Chief William Parker and mobster Mickey Cohen in post-World War II L.A. is slated to premiere Wednesday, Dec. 4. TNT’s scripted series lineup for 2013 also includes the continuation of Major Crimes on Monday, Nov. 25. Three scripted series will return in early 2014, including the third season of Dallas and the continued current seasons of Rizzoli & Isles and Perception. Next summer, new seasons of TNT’s summer hits will be joined by the action-packed drama The Last Ship, starring Eric Dane (Grey’s Anatomy) and executive-produced by Michael Bay (Transformers), and Legends, starring Sean Bean (Game of Thrones, Lord of the Rings) and executive-produced by Howard Gordon (Homeland, 24).

Consistently ranking as one of basic cable’s top dramas, Rizzoli & Isles stars Angie Harmon and Sasha Alexander as Boston’s top crime-solving duo. Harmon is Jane Rizzoli, a tough-as-nails Boston police detective, and Alexander is Maura Isles, a smart, impeccably dressed medical examiner from a privileged background. Despite being complete opposites, the two women share an offbeat chemistry, an authentic and deep friendship and a unique working relationship that together, helps them to solve the most complex murder mysteries in the city of Boston. Rizzoli & Isles also stars Brian Goodman, Jordan Bridges and Lee Thompson Yong, with Bruce McGill and Lorraine Bracco.

TNT’s mind-bending drama Perception features one of the most unique crime solvers on television, an eccentric neuroscience professor recruited by the FBI to help solve complex cases. Emmy® and Screen Actors Guild Award® winner Eric McCormack stars as Dr. Daniel Pierce, who possesses an intimate knowledge of human behavior and a masterful understanding of the way the mind works. Although Pierce’s mind may be brilliant, it is also damaged as he suffers from paranoid schizophrenia. Rachael Leigh Cook co-stars as FBI agent Kate Moretti, Pierce’s former student who has recruited Pierce to consult on cases. Also starring are Arjay Smith, Kelly Rowan and LeVar Burton.

In addition to Spielberg, Falling Skies is executive-produced by DreamWorks Television heads Justin Falvey and Darryl Frank, along with Remi Aubuchon and Greg Beeman. TNT recently announced it has renewed Falling Skies for a 10-episode fourth season, scheduled to air in summer 2014. Based on the most recent Live + 7 data available (eight episodes), Falling Skies is showing a slight uptick compared to season 2.

TNT is television’s destination for drama. Seen in 99 million households and ranking among cable’s top networks, TNT is home to such original drama series as Rizzoli & Isles, Major Crimes Falling Skies, Perception and Dallas, as well as the upcoming Mob City, Legends and The Last Ship. The network also features dramatic unscripted originals like Boston’s Finest and the upcoming Cold Justice, Marshal Law: Texas and Nashville Confidential. In addition, TNT is the cable home to popular dramas like Castle, The Mentalist, Bones and Supernatural; primetime specials, such as the Screen Actors Guild Awards®; blockbuster movies; and championship sports coverage, including NASCAR, the NBA and the NCAA Division I Men’s Basketball Championship.