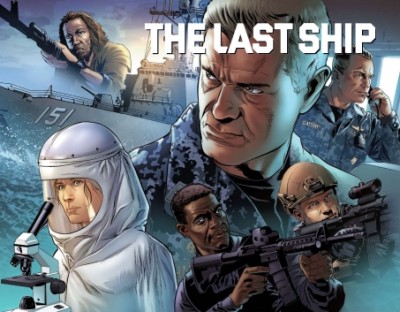 TNT is teaming up with Madefire to produce The Last Ship Motion Book – a free digital comic book to lead into the second season of basic cable’s #1 new drama series which returns on Sunday, June 21st.

The five-issue digital comic will be offered for free through the Madefire App. The first six pages of The Last Ship Motion Book will also be made available as a print one-off for Free Comic book Day on Saturday, May 2nd. Follow the jump for details.

TNT and Madefire are bringing The Last Ship, basic cable’s #1 new series, to the thrilling realm of Motion Books™ with a five-part digital comic book series that follows a pre-season-2 story arc. The Motion Books will be made available online for free and through Madefire’s top-rated app during the weeks leading up to the second season of The Last Ship, which is slated to launch with a two-hour premiere on Sunday, June 21, at 9 p.m. (ET/PT). In addition, Madefire and TNT make an exclusive print of the first six pages available for Free Comic Book Day (FCBD), which takes place Saturday, May 2, at participating comic book specialty shops across the U.S. & Canada and worldwide (www.freecomicbookday.com/StoreLocator).

To develop the Motion Book series for The Last Ship, show executive producers Hank Steinberg (creator of Without a Trace, The Nine) and Steven Kane (The Closer) have worked alongside writer Chuck Dixon (Team Zero, Seal Team 6, Batman) to create an original story within the post-apocalyptic world of the TNT drama. Visualized by graphic artists Renato Arlem (X-Men, Supergirl, G.I. Joe) and Omar Francia (Batman, Mass Effect, Star Wars), the story takes place between the first and second seasons of The Last Ship. It will be told through Madefire’s distinctive Motion Book format, which features episodic, short-burst (10-15 minute) reading and utilizes sound, music, motion and special effects to transport readers deep into story worlds.

Starting May 29, a new installment in The Last Ship Motion Book series will be made available online and through the Madefire App each Friday. The final installment, released on June 19, will be published just days before the launch of The Last Ship season 2.

“We are incredibly excited to be working with Madefire on bringing TNT’s The Last Ship to the dynamic world of Motion Books,” said Jeff Gregor, executive vice president and chief marketing officer for TNT and TBS. “With its suspenseful, action-packed storyline, The Last Ship translates beautifully to the Motion Book format. This is a great way to take fans even deeper into the fascinating world of this blockbuster series.”

“Madefire is proud to be a part of this never before seen chapter of The Last Ship story,” said Ben Wolstenholme, CEO and co-founder of Madefire. “With its rich characters and globe-spanning drama, The Last Ship has been an ideal fit for Motion Books storytelling – taking it beyond the show and placing it in the hands of readers everywhere. This collaboration with TNT is a perfect example of Motion Books as a companion to television, film and gaming.”

The wait is nearly over. TNT’s epic drama The Last Ship – basic cable’s #1 new series of 2014 – is preparing to set sail again this summer in its quest to save humanity after a devastating pandemic. Eric Dane (Grey’s Anatomy), Rhona Mitra (Strike Back) and Adam Baldwin (Firefly, Chuck) star in the high-impact series, which is produced by Platinum Dunes, with its partners – blockbuster filmmaker Michael Bay, Brad Fuller and Andrew Form – serving as executive producers. Co-creators and showrunners Hank Steinberg (creator of Without a Trace, The Nine) and Steven Kane (The Closer) are also executive producers, along with Jack Bender (Lost). The Last Ship is slated to launch its second season on Sunday, June 21, with a two-hour premiere at 9 p.m. (ET/PT).

Based on William Brinkley’s popular novel, The Last Ship chronicles a global catastrophe that nearly decimates the world’s population. Because of its positioning, the Navy destroyer U.S.S. Nathan James avoided falling victim to the devastating tragedy. But now the crew and its captain must confront the reality of their new existence in a world where they may be among the few remaining survivors. As the second season opens, Captain Chandler (Dane), XO Slattery (Baldwin) and the rest of the crew are working to disseminate the cure that paleomicrobiologist Dr. Rachel Scott (Mitra) developed at the end of season one.

Connect with TNT’s The Last Ship

Founded in 2011 by Ben Wolstenholme, Liam Sharp and Eugene Walden, Madefire is a media and technology company, and creator of the Madefire App for iPad, iPhone and iPod touch. Madefire also provides artists and writers a publishing solution called the Motion Book Tool, which allows them to build their stories in an exciting new format called Motion Books. Madefire is backed by True Ventures, with angel investors including Sina Tamaddon, former Senior Vice President of Applications for Apple Inc—who sits on Madefire’s Board of Advisors. The Board of Advisors also includes industry leaders like: Toni Schneider, CEO of Automattic (the company behind WordPress.com); Mike McCue, CEO and Founder of Flipboard; Dave Gibbons, co-creator of Watchmen, the bestselling graphic novel of all time; and Bill Sienkiewicz, widely recognized as one of the greatest innovators of sequential art.

TNT is television’s destination for drama. Seen in 101 million households and ranking among cable’s top networks, TNT is home to such original drama series as Rizzoli & Isles, Major Crimes, Falling Skies, The Last Ship, Murder in the First, Legends, The Librarians and Transporter The Series. TNT’s slate of upcoming scripted dramas includes Public Morals, Proof and Agent X. TNT also features such dramatic unscripted series as Cold Justice and the upcoming Cold Justice: Sex Crimes. In addition, TNT is the cable home to popular dramas like Castle, Bones, Supernatural and Grimm; primetime specials, such as the Screen Actors Guild Awards®; blockbuster movies; and championship sports coverage, including the NBA and the NCAA Division I Men’s Basketball Championship.