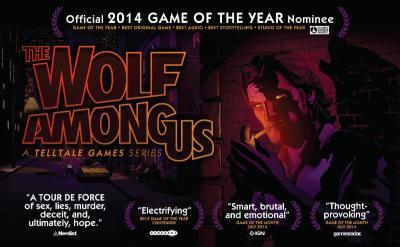 Official 2014 Game of the Year Nominee! Critically-Acclaimed ‘The Wolf Among Us: A Telltale Games Series’ Now Available at Retailers and available on PlayStation 4, PlayStation Vita, and Xbox One for the First Time.

“We are so proud to be a part of the rich tapestry of the FABLES universe, bringing that world’s darker takes on familiar fairytale characters to an interactive medium,” said Kevin Bruner, President and Co-Founder at Telltale Games. “In bringing The Wolf Among Us to PlayStation 4 and Xbox One formats, as well as the recent Android release, more players than ever can now experience being Sheriff Bigby Wolf and take the fate of Fabletown into their own hands.”

The Wolf Among Us: A Telltale Games Series has been met with critical acclaim since its premiere leading to its finale this July, when GameSpot.com heralded the series as a 2014 Game of the Year Contender. The series was nominated in five categories in the 2014 Golden Joystick Awards, including Game of the Year, Best Original Game, Best Audio, Best Storytelling, and Studio of the Year for Telltale Games.

The finale episode received a 9.3 out of 10 score from IGN.com who awarded it ‘Game of the Month,’ saying, “Simply put, The Wolf Among Us’ finale provides some of the finest storytelling I’ve played in a long time,” later adding “Telltale’s finale is a fantastic adventure, and some of the best work the studio has ever done.” 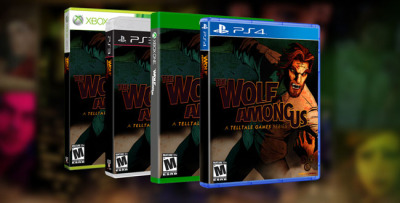 Nerdist.com called the series upon its conclusion, “… a tour de force of sex, lies, murder, deceit, and, ultimately, hope. The final moments of the series are guaranteed to be the subject of heated comment section debate for months to come and can totally shatter your perception of everything you’ve come to know.” Also in their review of the season finale, GamesBeat awarded the episode a 9.5 out of 10 score, saying “Cry Wolf ends Telltale’s Fables series on a memorable and effective note… It’s everything a finale should be.”

Official Xbox Magazine awarded ‘Cry Wolf’ a 9 out of 10, calling it “a spectacular end to an excellent series,” while Joystiq also gave the episode a 9 out of 10, saying, “The Wolf Among Us has been consistently excellent from start to finish.”

FABLES: THE WOLF AMONG US, a new digital comic based on the game, is set to debut on December 10th and will be available for download from digital comic retailers including Amazon, comiXology.com, Google Play, iBooks, and Nook Store. Print issues of the comic will hit shelves in January 2015.

A consistent New York Times bestseller, ‘FABLES’ is written by Bill Willingham and is one of DC Entertainment’s longest-running series published under its Vertigo imprint since 2002. With over a dozen Eisner Awards, including Best Writer, Best New Series, and numerous wins for Best Serialized Story, the FABLES universe has become one of the richest mythologies in the world of comics, imagining that characters like Snow White, The Big Bad Wolf and Pinocchio from the world’s most beloved storybooks are real – Real, and living among us, with all of their powers intact.

Set prior to the events seen in the first issue of the FABLES comic book series, The Wolf Among Us: A Telltale Games Series puts players in the role of Bigby Wolf, a man once more infamously known as The Big Bad Wolf. Now the sheriff of a hidden community in New York City, exiled from the land of fairy tales, Bigby is tasked by the bureaucrat Snow White to keep order within a society of mythical creatures and characters trying to remain undetected in the world of the mundane. From a chain-smoking member of ‘The Three Little Pigs,’ to a slippery Mr. Toad itching for his next wild ride, The Wolf Among Us examines the lives of beings straight from the pages of myth and lore, now trying to survive on the meanest and most run-down streets of New York.

The Wolf Among Us: A Telltale Games Series is licensed by Warner Bros. Interactive Entertainment on behalf of DC Entertainment, and is rated ‘M’ (Mature) for Blood and Gore, Drug Reference, Intense Violence, Partial Nudity, Sexual Themes, Strong Language, and Use of Tobacco by the ESRB.

About DC Entertainment
DC Entertainment, home to iconic brands DC Comics (Superman, Batman, Green Lantern, Wonder Woman, The Flash), Vertigo (Sandman, Fables) and MAD, is the creative division charged with strategically integrating its content across Warner Bros. Entertainment and Time Warner. DC Entertainment works in concert with many key Warner Bros. divisions to unleash its stories and characters across all media, including but not limited to film, television, consumer products, home entertainment and interactive games. Publishing thousands of comic books, graphic novels and magazines each year, DC Entertainment is the largest English-language publisher of comics in the world.

About Telltale, Inc.
Telltale Games is an innovative and independent developer and publisher of video games, and is the pioneer of the creation and delivery of episodic gaming content. Winner of numerous accolades, the studio is the recipient of over 80 Game of the Year Awards, Studio of the Year and other honors for The Walking Dead, a game series based on Robert Kirkman’s hit comic book. Telltale continues to expand its lineup with internationally recognized and acclaimed properties from partners such as DC Comics and others – yet to be announced – that will delight and excite gamers across the world. Telltale is a fully licensed third party publisher on Xbox 360®, PlayStation®3, and Wii and also publishes games on the PC, Mac, and Apple iOS platforms. For more information visit www.telltalegames.com.