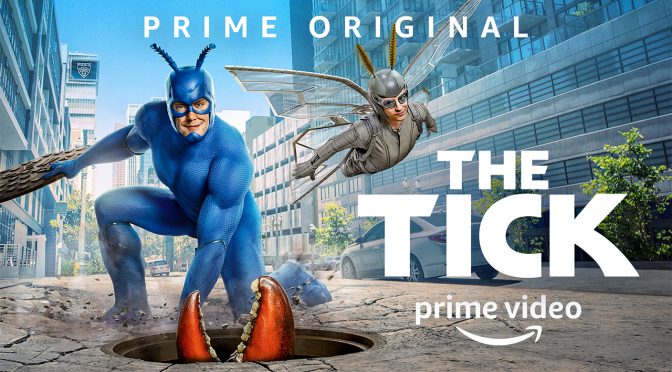 Right from the get-go, season 2 gets off to a great start with Arthur (Griffin Newman) – recovering from nearly dying while helping The Tick (Peter Serafinowiz) put an end to The Terror – having to choose between his job as an accountant and being a superhero (it seems his employer isn’t insured against dame by super brawl).

And that’s just the start…

In the ten episodes of season two, we learn a supervillain isn’t a monster; another supervillain is rebranding as a hero; motherly love is the ultimate motivation, and even non-super people can be full of surprises (and secrets – big secrets!). Oh, and a cast member from FOX’s brilliant but cancelled The Tick makes a surprising appearance in a recurring role!

With The Terror out of the way, The Tick and Arthur attempt to thwart a bank robbery and run smack into a ginormous crustacean – see supervillain who is not a monster.

Meanwhile, Overkill (Scott Speiser) learns that an old enemy (whom he thought he’d decapitated) may not be dead after all – The Duke.

At the same time, A.E.G.I.S. – a S.H.I.E.L.D.-type organization that registers superheroes (and funded the original Flag Five) – has reopened its office in The City because there might be more threats to The City than just The Terror (and because they’re embarrassed that they so badly dropped the ball on that).

On yet another level, Superian (Brendan Hines) shows himself to be one insecure dude when he lets negative press from a podcaster – and all those negative tweets on Twitter – provoke him.

He gets some advice from Arthur and takes it to a seriously uncomfortable place – provoking even more negativity from both sources. 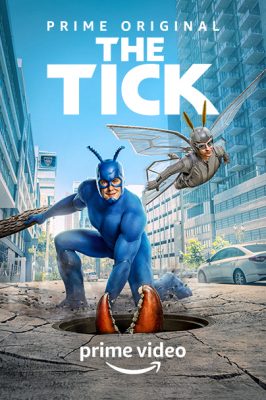 As Overkill and Dot (Valorie Curry), Arthur’s sister, try to find The Duke, Dot learns something new about herself – while convincing Overkill to talk to A.E.G.I.S. boss Commander Agent Tyrannosaurus Rathbone (Marc Kudisch) that he didn’t really go rogue. (Note: Speiser and Curry have amazing, ‘get a room already’ chemistry!)

Another fun sequence is when The Tick and Arthur apply to become A.E.G.I.S. agents – the paperwork makes the DMV look like a walk in the park (and introduces us to Clara Wong’s Miranda – who finds Arthur’s red tape skills a joy).

Then there’s Miss Lint (Yara Martinez), the villain gone good as Joan of Arc (she loves the pun – also the history) and her new sidekick, Edgelord (Julian Cihi), a tech wizard. Not to mention Frank (Joshua Schubart), a holdover henchman from season one – who has no idea what she’s doing.

As with season One, The Tick: Season 2 sends up superhero tropes with breathtaking frequency. My favorite? The Tick’s one-liner, ‘That hero walk felt good!’

Another trope that’s gets poked is the ‘It’s not my story to tell’ trope. It’s one of Overkills best non-violent moments.

Production values are solid throughout – the not a monster/not a supervillain costume is Greg Nicotero-worthy; the sets are meticulously designed and believable, and the episode scores are exactly right.

As with any good superhero comic/TV series, movie, The Tick: Season 2 sets up its season three villain – while also providing a unique twist to the Superian arc.

Plus, fans of the animated The Tick will probably break something laughing at the season’s last line.

In short, The Tick: Season 2 is simply not to be missed.