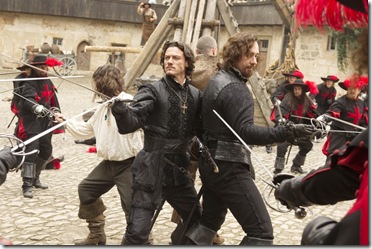 The Three Musketeers has seen several cinematic incarnations, the most popular of which was the brilliant 1973 version directed by Richard Lester. Anderson is no Lester, but he has both a sense of humor and a sense of adventure. He also has a capable cast that appears to be having the time of their lives.

The familiar story finds D’Artagnan [Logan Lerman, Percy Jackson] of to Paris to become a musketeer [like his father before him] and promptly running afoul of Captain Rochefort [Mads Mikklesen, Quantum of Solace], right hand man to Cardinal Richelieu [Christoph Waltz, Inglourious Basterds] – and all three of the titular musketeers: Athos [Matthew McFayden, The Pillars of the Earth], Aramis [Luke Evans, Clash of the Titans] and Porthos [Ray Stevenson, Thor] – who’ve just been humiliated by Milady, the Countess DeWinter [Milla Jovovich, Resident Evil 1-5] and the Duke of Buckingham [Orlando Bloom, Pirates of the Caribbean].

We get the ridiculously energetic four-against-forty fight sequence as the musketeers and D’Artagnan make the cardinal’s guard look like the Keystone Kops; the duplicity of Milady; Richelieu’s plot to take over the official reign of France by showing Louis XIII [Freddie Fox] to be a fool – setting up a fake affair between his queen [Juno Temple, The Other Boleyn Girl] and Buckingham.

And, lest we forget, the curious romance between D’Artagnan and Constance [Gabriella Wilde], one of the queen’s ladies-in-waiting. Not to mention the musketeers’ bumbling servant, Planchet [James Cordon, Doctor Who] – an oaf who comes through when he’s really needed, or Bloom going full-on ham as Buckingham.

Anderson, who could never be accused of finesse, doesn’t so much rip through the material as galumph merrily along. Working from a script by Alex Litvak [Predators] and Andrew Davies [Bleak House], Anderson employs less quick cutting than usual – that would ruin the 3D effect – so we get some fancy swordplay and stunt work, with moments of sudden slo-mo to heighten the moment.

While the performances are a touch more than they need to be, they’re infused with a spirit of fun that is ingratiating. Jovovich and Stevenson, in particular, are highly entertaining to watch – and young Lerman shows some pretty spiffy dash.

The 3D takes a while to really show to full effect, mostly because the opening sequence is a night sequence and that makes it murky. The rest of the film shows that, whatever his faults as a storyteller, Anderson knows how to exploit 3D – both in stuff coming off the screen at the audience, and in building a layered world that we can really give us the sense of being there.

The addition of pre-steampunk technology [airships, Gatling cannons and more] is completely ludicrous, but the whole film has such a grand silliness to it that it all fits together in a completely unexpected way.

Overall, The Three Musketeers is a fun romp that will entertain and delight if you just sit back let it happen. It may not be that much to say that it’s Anderson best work, but it is. Now all he needs is fans of Resident Evil franchise to check it out and all will be well…