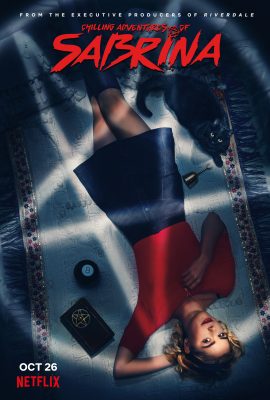 Sabrina Spellman is about to turn sixteen – the birthday where she is to choose between the Path of Light and the Path of Night.

Sabrina is half witch and half mortal – she doesn’t want to have to make that choice.

WELCOME TO THE COVEN

The wait is over, witches. Netflix has conjured up the official trailer for the Chilling Adventures of Sabrina. Summon your familiar and watch if you dare. CAOS comes October 26 only on Netflix.

You can stream Chilling Adventures of Sabrina here.

About the series
Chilling Adventures of Sabrina, starring Kiernan Shipka, imagines the origin and adventures of Sabrina the Teenage Witch as a dark coming-of-age story that traffics in horror, the occult and, of course, witchcraft. Tonally in the vein of Rosemary’s Baby and The Exorcist, this adaptation finds Sabrina wrestling to reconcile her dual nature — half-witch, half-mortal — while standing against the evil forces that threaten her, her family and the daylight world humans inhabit.