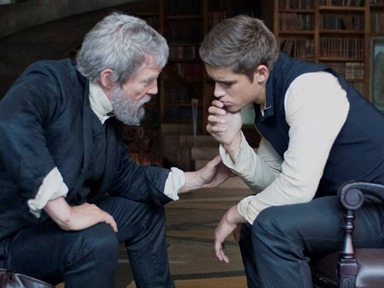 Based on Lois Lowry’s 1993 Newbery Medal-winning novel (which I have not read), The Giver introduces us to Jonas (Brendon Thwaites, Oculus, Maleficent), a youth on the verge of graduating from schoolboy to worker in a manmade utopia where strong emotions are controlled medically – and have been for so long that no one except a very few Elders even know it.

This community lives in perfect harmony. Families are created by placing compatible couples together (and everyone is compatible) and presenting them with children (presumably grown in laboratories) to raise. Children are raised to be specific, precise in everything they do – especially in expressing themselves (when Jonas asks his parents if his ‘parents’ love him, his mother insists he use more precise language). While the community may live in perfect harmony, the notes being played are very few – the first act of the film is shot in crisp black and white.

When graduation day comes, every other graduating youth is given a job, according to their scientifically determined skills – everyone except Jonas. After everyone has left the ceremony (much like the one in Divergent), Jonas is held back by the First Elder (Meryl Streep) and told he has been chosen to be The Receiver of Memory. It is a signal honor, but also something of a test for his mentor (Jeff Bridges) – the last person chosen failed miserably.

Jonas receives memories from his mentor, who figures he might as well be called The Giver, via physical touch. He gives Jonas good memories to start with – happy people, positive events. Jonas, though sworn not to share his new knowledge, quickly does just that – with Fiona (Odeya Rush), a childhood friend. She, of course, does not understand.

Because his progress (and the entire community, for that matter) is monitored, his mentor is chastised and follows that by introducing Jonas to some darker memories. By now, Jonas is skipping his morning medication and as he grows more aware of his emotions, through the transfers from The Giver, his world changes from black and white to full color.

And, yes, eventually, he decides to find a way to wake the community up – prompted by his discovery of what happens when old people and sickly babies are ‘released to Elsewhere’ (let’s just say that it’s probably what you’re thinking). To reawaken humanity, Jonas must face another childhood friend, Asher (Cameron Monaghan), who has become the pilot of a surveillance drone that also doubles as a weapon.

For most of the first two acts of The Giver, directed with a nice sensitivity by Philip Noyce (Salt, Rabbit-Proof Fence), builds a world that feels real; a world stringently adhering to science to maintain its apparent utopia.

Once Jonas undertakes to bring full-bodied emotion back to his community, the film turns into a mystical quest that seems to be saying that science is evil – instead of using that science to undermine the false utopia.

It’s a nice touch that Jonas’ quest is spurred by one particular memory – a memory that suggests that the rest of the world might not be the ravaged remnant that he taught to believe. Another problem is that Jonas’ quest covers an enormous distance – crossing a desert; wending his way through mountains – that no one could possibly cover in the brief amount of time that seems to have passed back home.

And the manner of restoring memory and emotion to the community is reduced to, essentially, crossing a line – no explanation given, not even a theory. It’s pure mystical hoo-hah and definitely lessens the impact of the film.

Bridges originally bought the rights to The Giver as a property to produce for his father, Lloyd Bridges. That he continued trying to get the film made long after his father’s passing tells us that he really believed in the story. His performance, along with Thwaites, is what drives the film as it has been made – but I suspect it has been changed a great deal over the years.

Besides Noyce’s expert direction, some lovely cinematography from Ross Emery and those two key performances by Bridges and Thwaites, everything else about the movie winds up being merely adequate. Even Streep is completely wasted in what is a very one-note role and Taylor Swift’s role is barely worth mentioning (which I’ve just done, so, mission accomplished).