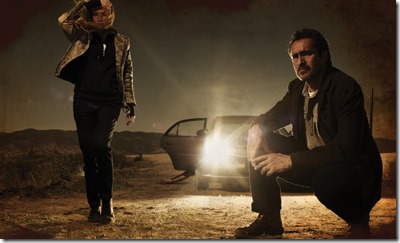 The Bridge (FX, Wednesdays, 10/9C) opens with a car approaching the bridge that crossing the American/Mexican border between El Paso, Texas and Juarez, Chihuahua. The lights go out on the bridge and, when they blink on again, there is a woman’s body carefully placed on the exact borderline between the two countries.

El Paso Homicide’s Sonya Cross (Diane Kruger) and Chihuahua State Police officer Marco Ruiz (Demian Bichir) soon find themselves having to solve the murder because the body turns out to be parts of two different women – an El Paso judge and one of the hundreds of murdered girls from Juarez.

Ruiz finds Cross abrupt and a stickler for rules (she wouldn’t let an ambulance cross the bridge because it would contaminate the crime scene). She finds him to be more relaxed about that sort of thing (he allows it through). Unfortunately, thanks to circumstance, they’re stuck with each other. 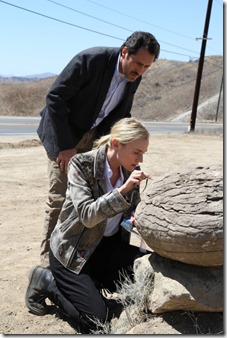 The series premiere of FX sets up a number of storylines – not all of which have more than a tenuous connection to the murder. The ambulance, for example, is taking a man suffering a heart attack to a hospital in El Paso, where he dies, leaving his widow, Charlotte Millwright (Annabeth Gish), very wealthy, but also with the knowledge that he wanted a divorce. The there’s the illegal immigrant arc – and the way it may tie other arcs together.

Another arc follows a social worker, Steven Linder (Thomas M. Wright), who might be the murderer – and might be a serial killer with a political agenda; yet another tracks boozy reporter Daniel Frye (Matthew Lillard) as he becomes a part of the investigation when the killer begins communicating with him.

The creator of The Bridge, Meredith Stiehm (Homeland) has a very complex tale to tell, so she don’t always spell everything out – like the fact that Cross has Asperger’s – because she gives the audience credit for enough intelligence to figure that sort of thing out for themselves. Where she and her fellow writers excel is in building the world of series and fitting the murder, motive and social strata of the neighboring cities into an organic whole. 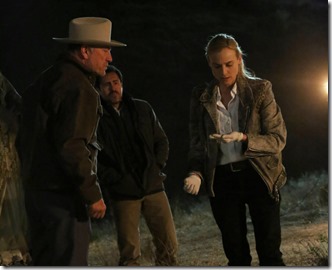 Much of the series, judging from the three episodes included in the press kit, will be exploring the differences between the cities as well as those between Cross and Ruiz. Juarez may have more poverty than El Paso, but it seems to have more life, too – a parallel that is echoed in our leads.

Ruiz is much more relaxed about rules, and has a good home life with his wife, alma (Catalina Sandino Moreno) and daughters; Cross lacks empathy and is a stickler for procedure – it’s the only way she can relate to most situations – though she has a good, if unorthodox relationship with her boss, Lt. Hank Wade (Ted Levine, Monk) that approaches father/daughter. Ruiz is tactful, diplomatic; if it occurs to Cross, she’ll say (or do) it – her approach to sex is, to say the least, abrupt.

Both are good cops – Ruiz is neither surprised nor put out by Cross asking if he’s just another corrupt Mexican cop – but they have distinctly different styles. Where Cross is not happy about being paired up with Ruiz, he is mostly just intrigued and a bit exasperated by her. It makes for a bit of a different take on the standard buddy/cop theme. both Kruger and Bichir are excellent in their roles.

Because the serial killer makes it so, The Bridge is political on some levels, but it’s more humanist on others. It has to be if it is to work for any extended period. And it does – work, that is – really well. It is, in fact a multi-layered gen of a show.

Photos by Frank Ockenfels and Byron Cohen/Courtesy of FX