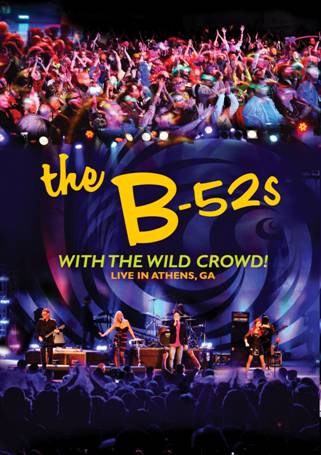 In October of 2011, I had posted an article about Eagle Rock Entertainment releasing its first ever live album from the B-52’s entitled “With The Wild Crowd”. Well in one more week, the DVD/Blu-ray will be available to purchase and will be filled with plenty of entertaining footage. More details from the press release after the jump:

EAGLE ROCK ENTERTAINMENT INVITES YOU TO THE “LOVE SHACK”

In February 2011, thirty-four years into their reign as the World’s Greatest Party Band, The B-52’s returned to celebrate in the town where it all began – Athens, Georgia. Now this concert will be available as the band’s first-ever live DVD and Blu-ray, when With The Wild Crowd – Live In Athens, GA is released via Eagle Rock Entertainment on March 20, 2012.

With The Wild Crowd! was recorded in the B-52s’ hometown at a show that commemorated the band’s 34th anniversary of their first-ever live show on Valentine’s Day 1977. Wig-wearing, boa-draped, glitter-covered fans came from near and far to celebrate this historic event as the band delivered a sizzling set that turned Athens’ Classic Center into a cosmic dance hall.

Filmed in high-definition with DTS Surround, Dolby Digital 5.1 sound, this 90-minute set is packed with fan favorites like “Love Shack,” “Rock Lobster,” “Roam,” “Funplex,” “Give Me Back My Man,” “Private Idaho,” and “Planet Claire.” With The Wild Crowd! is filled with all the excitement, fervor and energy of a classic B-52s dance party, a showcase for the non-stop, high-octane force of a group that has never lost their youthful and dynamic energy.

Only the B-52s can lay claim to their one-of-a-kind sound. There’s certainly no mistaking the signature call-and-response vocal play of singers Fred Schneider, Kate Pierson, and Cindy Wilson matched with the unique guitar stylings of Keith Strickland. And with over twenty million albums sold and a nonstop touring schedule, this revolutionary rock band shows no signs of slowing down. The band has just celebrated their 35th Anniversary and has announced plans to embark on a very special 35th Anniversary Tour in Summer 2012, including many co-bill dates with their good friends Squeeze.

Eagle Rock Entertainment recently released the CD component of With The Wild Crowd – Live In Athens, GA in October 2011.

The B-52’s: With The Wild Crowd will have many great performances on the DVD/Blu-ray.
Here’s a few clips to give you a sample:

The B-52’s: With The Wild Crowd will be available for DVD/Blu-ray on March 20th, 2012 and can be purchased at:
http://eaglerockent.com/product/EV303679/With+The+Wild+Crowd!+Live+In+Athens
http://www.amazon.com/B52s-With-Wild-Crowd-Athens/