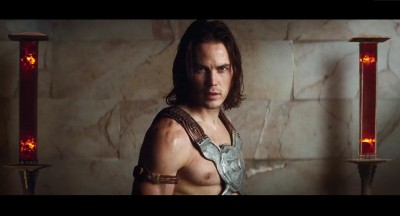 John Carter is an example of an adaptation that works as a movie. It doesn’t require you to know anything about the source material, or, expect the audience to have a crystal ball and know what’s “going to happen” in the “sequels.” It was nice watching an adaptation that stood on its own feet and hugged me with all four arms. It kept me entertained and made me want to go out and read the original source material for more detail.

What I loved about this movie was not the action; it was the journey of discovery. Taylor Kitsch does a good job as John Carter.  He plays the character straight and never goes over the top with it.  I loved watching him explore his new situation all of his reactions felt genuine. His relationship with the Princess of Mars Dejah Thoris (Lynn Collins) works amazingly well.  There is real chemistry between Kitsch and Collins. Collins is really good in this. She’s sexy, but strong and has a refreshingly “non-Hollywood” look that I just loved. 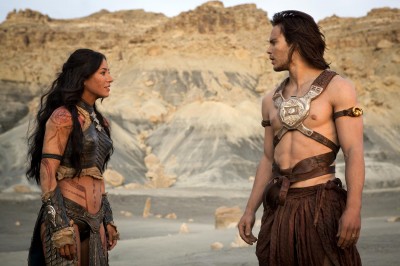 Another Pixar alum goes live action, this time it is Andrew Stanton.  His live action debut is full of heart and soul, but Stanton’s action scenes were missing something. He never conveys the exhilaration Carter must feel being able practically “fly” in this strange new world. It would have been nice to see one shot of a big shit-eating grin on Kitsch’s face as he flies through the air.

There are some beautiful set pieces in the movie.  I loved the design and wide-angle shot we get the first time Carter sets his eyes on Hellium. The Costume design for Collins was beautiful but all the male costumes looked the same. Could not tell who was whom or make out who the bad guys were.

The only gripe that I really had with the movie was the script, by Stanton never shows the suffering of Thoris’ people. There was no motivation given to the lead bad guy other than he wanted power – for power’s sake, apparently, and the Princess did not want to be forced to marriage. We never get a sense of what would happen if he did take over. We never see the people suffer and the movie felt like it was overly “sanitized,’ for mainstream family consumption.

But these are minor quibbles; this movie is all about the relationship between Kitsch and Collins, everything else is window dressing, if that works then the rest of the movie does as well. These two hold this movie together and frankly I love the by the numbers story telling here. This movie is not as great, or epic as it wants to be, but it is thoroughly enjoyable.

One thought on “John Carter Review! Michelle Loves It!”