Entertainment News for The Rest of Us
Sheldon Wiebe
Books 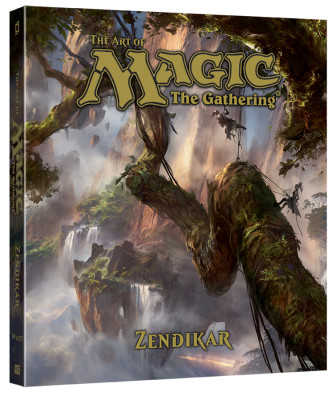 The Art of Magic: The Gathering – Zendikar is an oversized hardcover collection of full color art from the  popular strategy card game that reveals the secrets of Zendikar – its people, its continents and its creatures.

A collaborations between Wizards of the Coast and VIZ Media’s Perfect Square imprint, The Art of Magic: The Gathering – Zendikar will be in stores on January 5, 2016. For further details, follow the jump.

VIZ MEDIA ANNOUNCES THE RELEASE OF THE ART OF MAGIC: THE GATHERING—ZENDIKAR

San Francisco, CA, December 7, 2015 – VIZ Media, LLC (VIZ Media), the largest distributor and licensor of manga and anime in North America, takes fans and players of Wizards of the Coast’s Magic: The Gathering® on a fantastic journey to the exotic world of Zendikar in the gorgeously illustrated release of THE ART OF MAGIC: THE GATHERING—ZENDIKAR.

Set to debut on January 5th, 2016, THE ART OF MAGIC: THE GATHERING—ZENDIKAR is a hefty 240-page book that features full color illustrations from some of Magic‘s best artists, such as Aleksi Briclot and Adam Paquette, as well as in-depth lore written by bestselling author James Wyatt. THE ART OF MAGIC: THE GATHERING—ZENDIKAR will be available in print from VIZ Media’s Perfect Square imprint and will carry an MSRP of $39.99 U.S. / $45.99 CAN.

A first of its kind! This massive hardcover art book features incredible images depicting the award-winning art of Magic: The Gathering®. Explore the tumultuous world of Zendikar, a land fraught with perils, and join the fight for survival as the fragments of civilization confront the unnatural Eldrazi. Follow in the footsteps of heroic Planeswalkers as they combine their unique talents, forming the Gatewatch to overcome the greatest threats the Multiverse has ever known. The secrets of Zendikar—its peoples, continents, and creatures—are ready for fans to discover!

“Magic players and fans of fantasy art will love the breathtaking art and detailed lore that celebrates the rich and imaginative geography and inhabitants of Zendikar,” says Beth Kawasaki, Senior Editorial Director. “The new release is also an ideal complement to the Battle for Zendikar game set and will give players greater insight and background about this strange and often deadly world.”

Throughout its 22-year history, Magic: The Gathering has visited many richly imaginative worlds through card sets and stories. In the game’s newest release, Battle for Zendikar (www.BattleForZendikar.com), Magic returns to the fan-favorite world of Zendikar, where united tribes of elves, vampires, and humans battle the monstrous Eldrazi across strange floating ruins and beautiful landscapes.

Developed and published by Wizards of the Coast, a subsidiary of Hasbro, Inc. (NASDAQ:HAS), Magic: The Gathering is a massively popular strategy game, with more than 20 million players and fans worldwide. In this innovative card game, players build personalized decks using cards they have collected from booster packs and by trading with friends. Magic offers a robust gaming experience for its community of passionate fans through face-to-face play events and social gatherings in more than 7,000 hobby game stores around the world, complemented by its Magic Duels and Magic Online digital games. For more information, visit MagicTheGathering.com.

For additional information on THE ART OF MAGIC: THE GATHERING – ZENDIKAR or other titles published by VIZ Media, please visit www.VIZ.com.