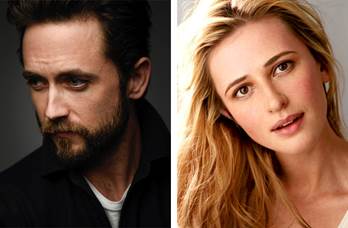 American Gothic is slated to premiere in Summer 2016 and is about a prominent Boston family that makes a chilling discovery about some unexpected skeletons in their collective closet. For more, follow the jump.

JUSTIN CHATWIN AND MEGAN KETCH TO STAR IN “AMERICAN GOTHIC,” A NEW DRAMA SERIES FROM STEVEN SPIELBERG’S AMBLIN TELEVISION AND CBS TELEVISION STUDIOS, TO BE BROADCAST IN SUMMER 2016

Justin Chatwin and Megan Ketch have joined the cast of AMERICAN GOTHIC, a new one-hour murder mystery series from Steven Spielberg’s Amblin Television and CBS Television Studios, to be broadcast in summer 2016.

Chatwin will play Cam, a sensitive, introspective artist and recovering drug addict who begins to realize that his 8-year-old son has a serious, terrifying problem – and ultimately seeks comfort in the arms of his manipulative but magnetic ex-wife, a fellow addict.

Ketch will play Tessa, a bright, nurturing public school teacher who soon finds herself deeply conflicted about how to handle a chilling discovery linked to her family.

Currently, Chatwin is shooting the feature film “CHIPs.” Prior to that, he completed the independent films “The Scent of Rain & Lightning” and the comedy “Unleashed.” Chatwin’s television credits include roles in “Shameless” and “Orphan Black,” as well as guest appearances on numerous series, including “Weeds” and “Lost.”

Ketch is best known to television audiences for her recurring roles in the series “Under the Dome,” THE GOOD WIFE and BLUE BLOODS, on the Network, and “Jane the Virgin.”  In 2014, she appeared in the feature film “The Big Wedding.”

AMERICAN GOTHIC centers on a prominent Boston family that is attempting to redefine itself in the wake of a chilling discovery that links their recently deceased patriarch to a string of murders spanning decades, amid the mounting suspicion that one of them may have been his accomplice.

AMERICAN GOTHIC is produced by CBS Television Studios in association with Amblin Television. Corinne Brinkerhoff (THE GOOD WIFE, “Jane the Virgin”), Justin Falvey and Darryl Frank (“The Americans,” “Under the Dome,” “Extant”), James Frey and Todd Cohen serve as executive producers. The series will be distributed domestically by CBS Television Distribution and worldwide by CBS Studios International.