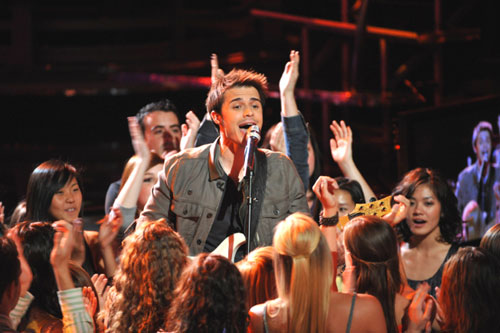 I never watch recap shows and I kept that trend up for the finale. I watched Veronica Mars, played some Rockband Classic Rock (pretty nice set list), read a bit of the how to develop for Twitter book and sat in my Jacuzzi for a good 30 minutes, anything other than watching that 2 hour trainwreck.  I have to say, I was surprised at the choice in Idol Winners, I was going to make you click the read more button to find out, but what’s the point, I’m sure you know already – KRIS ALLEN is your new American Idol!  It’s pretty amazing that he won, he was this year’s Jason Mraz had the weakest voice of everyone, no personality, bland, predictable, but I have to admire him he stuck it out. I think maybe the judges constant pimping of Lambert and Gokey since week 17 finally turned off enough voters.

This choice is as much a repudiation of the Judges manipulations (especially Simon Cowell’s constant begging people to vote for Adam) this season than an affirmation of Allen. The folks over at Vote for the Worst are trying to claim credit, but it’s complete BS, because they didn’t make Allen their pick until the top 2. I think Adam got a little cocky in the last few weeks which ended in his off performance last night. But the Judges can take heart because they did get Adam to the Finale. I’m a little sad, because it would have been fun to have him be the first open, and I mean OPEN gay American Idol. But with all the horse racing upsets in the last few weeks, this is somehow fitting.

One thought on “TELEVISION NEWS: Your New American Idol!”