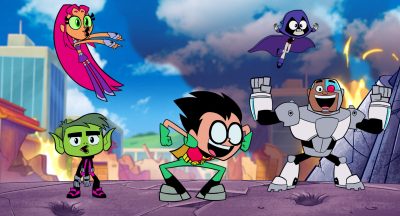 Basically, the plot here is that the Teen Titans – mostly Robin (voiced by Scott Menville) – are disappointed that there hasn’t been a movie made about them – they can’t even get into the premieres of the movies for DC’s other heroes.

When they try to persuade hotshot director Jade Wilson (Kristen Bell) to make a Teen Titans movie, she refuses – noting that they don’t even have an arch-nemesis. 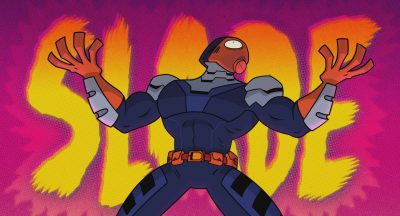 When they finally get one – Slade (Will Arnett) – they have to prove to him that they’re worthy of being arch-nemeses.
There is a plot afoot to conquer the world through mind manipulation (Slade’s one, slightly laughable super power).

Once you get past the fart and poop jokes (at least one of which actually works) and the Deadpool jokes (the Titans keep calling Slade Deadpool for very obvious reasons), the movie is pretty thin – the Stan Lee cameo is one of the few other gags that land.

The one thing that can safely be said about Teen Titans Go! To the Movies is that there are more DC superheroes onscreen than have ever been seen before (from Aquaman to Zatanna, in fact) – something that might keep a few super comics fans watching.

I watched the movie in a theater in which the audience was about 50% per cent kids – and the silence was deafening. (The first fart joke got a laugh but after that… nada, zip, bupkis, zilch, crickets). 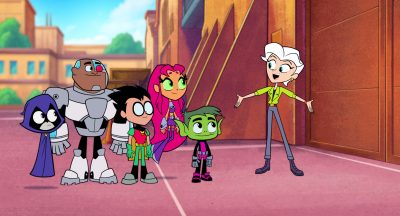 Technically, the animation was a couple notches better than the titans’ Cartoon Network show and there were a lot of bright colors. TTGTTM is fast-paced but still feels like a slog – at 93 minutes, it’s about ten minutes too long.

Sure, the film makes much of the value of friendship and self-esteem, but it does so in such a ham-fisted way that it almost feels insulting to anyone over six.

The lead voice cast – Greg Sipes (Beast Boy), Khary Payton (Cyborg), Tara Strong (Raven), Hynden Walch (Starfire) and, especially Nicolas Cage (Superman – there’s the best joke in the film) – give it their best shot but are let down by the writing.