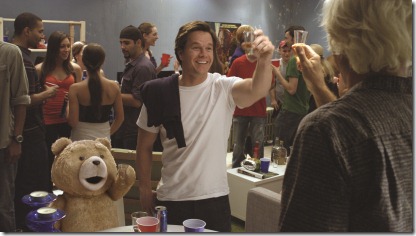 Right from the opening narration (perfectly modulated by Patrick Stewart, to be consistent with only the sweetest, gentlest children’s recordings), the tone is set – from announcing the power of an eight-Year old boy’s wish, to describing, graphically, one direction life can go. From the wonderment of young John discovering his Christmas wish has come true, to the somewhat less positive response of his parents to the discovery, TED makes its position clear: this is a warm-hearted, cuddly, crude and delightful movie.

The brief opening takes us through the abovementioned events and Ted’s brief period of fame before moving to the present, where John (Mark Wahlberg) and Ted (voiced by Seth McFarlane) are smoking up and eating breakfast cereal from the box before Ted drives John to work – a humdrum gig renting cars for a fifth-rate car rental agency – displaying Ted’s driving skills, or lack thereof.

Shortly, we meet Lori (Kunis), John’s girlfriend of four years. He’s planned a big night out – dinner at the best restaurant in town – but worries that she might be expecting more. Like engagement ring more…

From that point on, TED is about how Ted and John’s arrested development works against John with Lori. There are several terrific (and occasionally exceptionally gross) bits – Ted and the hookers, for one, and an extended bit with Sam Jones (playing off Ted and John’s love of Jones’ movie, Flash Gordon – which they peg as so awful it’s wonderful) – and a couple of antagonists in Lori’s skeevy boss (Joel McHale) and a creepy father and son duo (Giovanni Ribisi and Aedin Minks) who wish to own Ted. 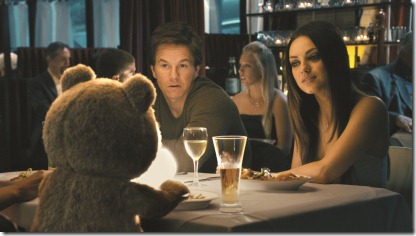 TED is a parody of all two-boys-and-a-girl movies, as well as movies that try to juice up the two-guys-and-a-girl thing with ridiculous action scenes from out of left field in the last act. And, as with the best parodies, it is a prime example of the genres it spoofs (like Hot Fuzz is a great cop/buddy flick, or Scream is a great slasher movie).

The reason it works is that Seth McFarlane, like very few filmmakers (think Judd Apatow as a good example), knows that an R-rated comedy can only work really well is the story and characters are real and heartfelt. If they are, you can get away with the ultimate poop joke (trust me on this one), no matter how gross it is.

In this endeavor, McFarlane (as writer, director and co-star) is aided by CG character generation that is so good that we never, for a single second, doubt that Ted is real. He occupies space, moves properly through all kinds of light and shadow, and has an emotional weight that is completely real.

Kunis, McFarlane and Wahlberg have great chemistry and, once again playing the straight man in a comedy, Wahlberg just feels right. Not only can we see how Lori would be involved with John, we see how and why she would have put up with Ted for so long.

When it comes time for Ted to move out on his own, (beginning the avalanche of events that lead to Sam Jones), we feel for both guys as much as we do for Lori. And when Ted finds love with Tami-Lynn (Jessica Barth), who gets his sense of humor, we buy that, too.

Through it all, we know that – even when John and Lori hit that nasty rough patch – these crazy guys will somehow find a way. Even if that way involves Norah Jones and public humiliation. And that’s just part of the fun.