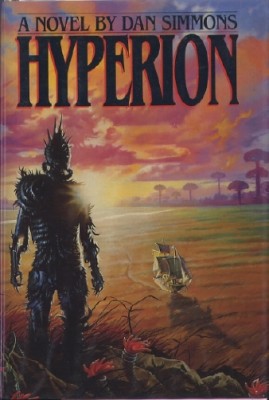 Cooper will executive produce along with King and Phillips. Itamar Moses (Boardwalk Empire) will write the screenplay and serve as co-executive producer. Universal Cable Productions will serve as the studio. Hyperion will be a production of Graham King’s GK Films and Bradley Cooper and Todd Phillips’ 22nd and Green.

Set on the eve of Armageddon with the entire galaxy at war, Hyperion is the story of seven pilgrims who set forth on a voyage to seek the answers to the unsolved riddles of their lives. Each carries a desperate hope and a terrible secret — while one may hold the fate of humanity in his hands.

“It is an absolute honor to enter into the world created by Dan Simmons that is arguably one of the greatest works of science fiction, and help realize it for television audiences,” said executive producer Cooper.

GK Films is one of the foremost creative forces in both major motion pictures and independent features.  Helmed by Academy Award-winning producer, Graham King, the company has produced and executive produced more than 45 films, grossing $1.4 billion at the domestic box office, and over $3.3 billion worldwide.  Also heralded by critics and film groups, GK Films’ projects have been nominated for 61 Academy Awards, 38 Golden Globe Awards, and 52 British Academy Film Awards. Forthcoming projects include the film adaptation of the hit YA novel THE 5TH WAVE starring Chloe Grace Moretz set for release on January 29, 2016; an untitled romantic thriller written by Steven Knight starring Brad Pitt with Robert Zemeckis attached to direct; the highly anticipated franchise reboot of TOMB RAIDER; a remake of the classic French film THE RED CIRCLE; and the untitled FREDDIE MERCURY STORY. Previous GK Films’ projects include WORLD WAR Z, ARGO, HUGO, RANGO, IN THE LAND OF BLOOD AND HONEY, THE TOWN and THE TOURIST.  King won a Best Picture Oscar as a producer on Martin Scorsese’s 2006 crime drama, THE DEPARTED.  King’s past film credits also include TRAFFIC, THE AVIATOR, GANGS OF NEW YORK, ALI and BLOOD DIAMOND.