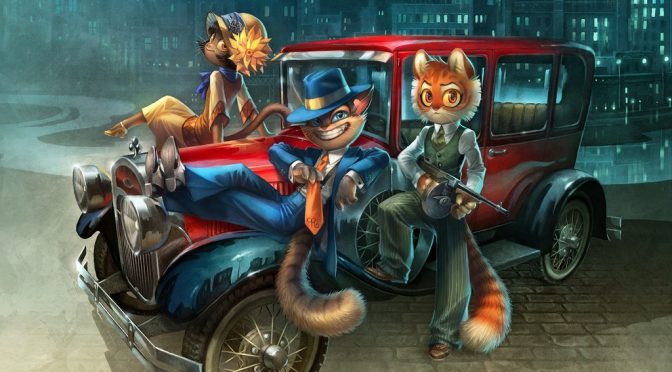 The Lackadaisy is the speakeasy where all the cool cats (literally) hang out. Show the password and you’re in.

Details on the Kickstarter campaign – and character designs – follow.

(March 16, 2020) Iron Circus Comics Publisher Spike Trotman, cartoonist Tracy Butler, and director Fable Siegel are partnering for an ambitious multimedia crowdfunding campaign to adapt Butler’s webcomic phenomenon Lackadaisy into an original animated short, along with a new collection of art and never before published mini-comics, The Lackadaisy Essentials. The 42-day campaign is the first ever multimedia undertaking for Iron Circus Comics, the trailblazing comics publisher that has funded more than 20 graphic novels and raised close to 1.5 million dollars in funding on Kickstarter.

Set in St. Louis, Missouri during the days of Prohibition, Tracy Butler’s Eisner Award-nominated webcomic Lackadaisy features the Lackadaisy, a speakeasy tucked away in a cave beneath the Little Daisy Cafe, where flashing the club symbol from a deck of cards grants every cat in-the-know access to more moonshine than they could ever drink. The joint’s packed full of tough dames, crooked cops, rum-runners, and wide-eyed ingenues. And they are, literally, all cool cats. The jazzy, sepia-toned crime story features action and adventure, comedy and crime, and a colorful cast of cats, including the Lackadaisy proprietors Atlas and Mitzi May, rumrunner Rocky Rickaby, and the sharp-tongued heiress to the quickly-dwindling Lackadaisy fortune, Ivy Pepper.

“Lackadaisy is the tale of a gang of jazz band stragglers, ruffians, and alley cats struggling to keep a once popular Prohibition-era speakeasy in operation,” said Tracy Butler. “Amidst their spectacular failures and unlikely victories under the nose of the law and up against their ruthless, outsized competitors, the Lackadaisy crew adapts and survives as a syndicate of St. Louis bootleggers, by relying on the strengths of their tight (if dysfunctional) family dynamic. In a broader sense, the story is an indulgent romanticization of the past, that explores the dangers of exactly that – the destructiveness of lingering on the good old days that were, perhaps, not as good as they appear, through the distortion lenses of grief, nostalgia and lovelorn desperation. The 1920s ambiance of hot jazz, hot bullet casings, and bad hooch isn’t without its heady sense of levity and humor, though.”

A former game developer, illustrator, and graphic designer, Tracy Butler began Lackadaisy in 2006 after researching the history of her century-old St. Louis home, and being inspired by her love of jazz music, and 1920s aesthetics. As the creator of the comic, Tracy will play a role as co-director on the animated short, overseeing art direction.

“I’ve presented Lackadaisy strictly as comic panels and speech bubbles since its inception, but the story has all this time been playing out in my head like an animated film,” said Butler. “It’s a side effect, perhaps, of a childhood nourished on Looney Tunes, Disney, and Don Bluth features, but I’ve been dreaming of sharing that living, breathing, musical version of it with readers and newcomers alike for so long.”

Joining Butler and Trotman for The Lackadaisy Animated Short is director Fable Siegel (Titmouse, Hazbin Hotel). “I got into animation because I wanted to make dramatic, aesthetically intensive stories,” said Siegel. “I wanted to direct the next Lion King, another Batman the Animated Series or a Gargoyles from a very young age. Trouble is, those kinds of animated stories are few and far between in the Western hemisphere, despite the growing popularity of Japanese animation and the likes of Bojack Horseman, Avatar the Last Airbender, and Love, Death and Robots, which demonstrate a huge appetite for nuanced and mature cartoons. And I just love drawing and writing the Lackadaisy characters. There’s a rhythm to their existence that excites me and I can’t wait to start on this self contained, animated short.”

To bring the project to Kickstarter, Butler is collaborating with publishing pioneer Spike Trotman. “Iron Circus Comics has been a trailblazer in comics publishing for over a decade,” said Trotman. “We were a Kickstarter early adopter, launching our first project in 2009, the year the platform debuted, and have gone on to launch 23 more projects and clear nearly $1.5 million in funding on the platform. After achieving international distribution through Ingram, and securing a number of #1 New Releases and Amazon bestselling titles, along with Eisner-nominated and Lambda/Harvey Award-winning graphic novels, we’re making our boldest, riskiest move yet, and expanding into animation.”

“As the 20s dawn on us again, it’s the perfect moment to adapt Lackadaisy into another medium,” said Butler. “With the animation tools available, the artists on deck raring to get to work, and the internet eager for more independently created media, the auspiciousness seems writ-large – splashed across an art deco picture palace marquee, if you will. Now’s the time.”

If funded through Kickstarter, pledges will be delivered to backers this fall. Lackadaisy is live as of March 16, 2020 and runs for 42 days.

A former game dev, illustrator and graphic designer, Tracy Butler began Lackadaisy after researching the history of her century-old St. Louis home, and being inspired by her love of jazz music and 1920s aesthetics. Boasting over 1,600 backers on Patreon, Lackadaisy has been her full-time job for years, garnering a dedicated readership of thousands. As the creator of the comic, Tracy will play a role as co-director on the animated short, overseeing art direction.

Fable Siegel is a veteran animation professional, boasting a resume that includes Titmouse, Starburns, the internet phenomenon Hazbin Hotel, and two Game Grumps Animated shorts, along with storyboard work for Cartoon Network (Ben 10), Stoopid Monkey (Adam Ruins Everything: Reanimated History), Warner Brothers (Wacky Races), Shadow Machine (F is for Family), and more, as well as being a board artist, animator, and designer for Six Point Harness (Like Share Die).  Brought onto the Lackadaisy animated short as a production manager, director, and producer, they’ll be overseeing the project utilizing their years of professional experience and skill.

C. Spike Trotman was born in DC, raised in MD, and lives in IL. An artist and writer, she founded Iron Circus Comics in 2007, which has since grown to become the region’s largest comics publisher. Her notable work includes the webcomic “Templar, Arizona,” the Smut Peddler series of erotic comic anthologies, and Poorcraft, a graphic novel guide to frugal living. A Kickstarter early adopter, she pioneered the widely-adopted bonus model that’s since completely reshaped the pay system of the small press, jump-starting the current renaissance of alt-comics anthologies. Iron Circus is also the first comics publisher of note to fully incorporate crowdfunding into its business model, inventing one of the single most effective uses of new media in comics publishing today.