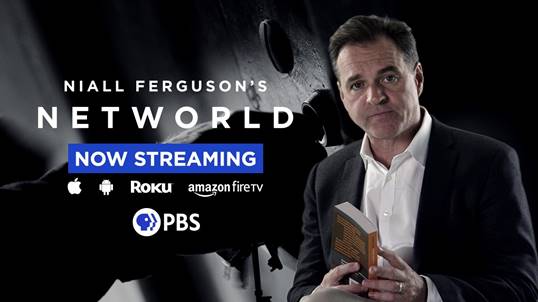 Long before the Covid-19 virus reached its current pandemic designation, much of the ‘information’ on the internet has been, shall we say, dodgy.

Now with the pandemic, there is a wealth of misinformation about how to deal with it.

Why Misinformation on Social Networks Isn’t a New Dilemma; How History Provides Perspective; & What To Know About The Spread Of Fake News During Challenging Times

Misinformation and fake news are spreading quickly across the country, dominating headlines and giving us reason to question everything from how to deal with a very real pandemic to what is true about our political process.  In light of recent events, , wanted to share that PBS’ new three-part special, Niall Ferguson’s Networld is now available to stream for free on pbs.org/networld, the PBS Video app and the PBS YouTube channel.

Hosted by Niall Ferguson, historian, NY Times best selling author and Stanford University senior fellow, the show examines how understanding social networks of the past can provide insight into how information is shared today, how that intel impacts our collective future and how truth itself, about topics including COVID-19, and more might be at a disadvantage in the months ahead.

In looking at the origin story of social networks — which existed in some form long before the Internet – the docu addresses why platforms like Facebook, Twitter, Instagram, Snapchat and TikTok can be a real source of anxiety – why they continue to be at the center of fake news and extreme views, how they are used to manipulate public opinion, and why they are at the center of multiple security breaches and information wars that are all causing alarm, especially relevant in our world today.

Inspired by the bestselling book “The Square and the Tower: Networks and Power, from the Freemasons to Facebook” (Penguin Books), historian and author Niall Ferguson examines how human behavior, disruptive technology and the desire for profit motivates ideation, energizes communication, and ultimately changes the world.

Below please find synopses for all episodes:

Host Niall Ferguson focuses on the great network revolution of our time and one that happened 500 years ago – the Protestant Reformation. With the help of experts in network theory and precedents from history, Ferguson untangles important issues including why social media networks polarize us, why some ideas go viral and why truth itself is at a disadvantage.

By looking at lessons from Victorian telegraph pioneers, Cold War history, Fritz Lang’s “Metropolis,” and George Orwell’s “1984,” host Niall Ferguson tells the story of how a decentralized, not-for-profit worldwide web shape-shifted to become a highly profitable network controlled by a tiny elite selling our attention for billions of dollars to the world’s advertisers.

Host Niall Ferguson focuses on the geopolitics of our interconnected world. With lessons from the fight against terrorism in Iraq, Russian attempts to divide Americans through social media and the rise of an Internet-powered surveillance state in China, Ferguson shows how our democracies are under threat from forces that exploit and weaponize the social networks that we invented. He posits a “Networld War” that we, the West, may not win.