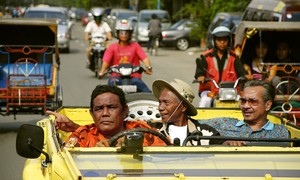 The Act of Killing features Indonesian death squad leaders like Anwar Congo (above, center),  dramatizing their acts – from slaughtering whole villages to offering a victim a last cigarette before killing him.

One of the most shocking documentaries ever made, The Act of Killing, will premiere as part of PBS’ POV series on Monday, October 6th (check local listings for times). For futher details follow the jump.

Oscar®-nominated ‘The Act of Killing,’ a Dreamlike, Terrifying Journey Into the Minds of Death Squad Leaders, Has National Broadcast Premiere Monday, Oct. 6, 2014 on PBS’s POV
“I have not seen a film as powerful, surreal and frightening in at least a decade. . . . It is unprecedented in the history of cinema.” —Werner Herzog

Nominated for an Academy Award®, The Act of Killing is as dreamlike and terrifying as anything that Werner Herzog (an executive producer) could imagine. The film explores a horrifying era in Indonesian history and provides a window into modern Indonesia, where corruption reigns. Not only is the 1965 murder of an estimated one million people honored as a patriotic act, but the killers remain in power. In a mind-bending twist, death-squad leaders dramatize their brutal deeds in the style of the American westerns, musicals and gangster movies they love—and play both themselves and their victims. As their heroic facade crumbles, they come to question what they’ve done.

Joshua Oppenheimer’s The Act of Killing, the most-honored documentary of 2013 and winner of the 2014 BAFTA Award for Best Documentary, has its national broadcast premiere on Monday, Oct. 6, 2014 as a special broadcast on PBS’s POV (Point of View) series. (Check local listings.) It will stream on POV’s website www.pbs.org/pov/theactofkilling/ from Oct. 7 – Oct. 21, 2014. American television’s longest-running independent documentary series, POV is the recipient of a 2013 MacArthur Foundation Award for Creative and Effective Institutions.

When the government of Indonesia was overthrown by the military in 1965, Anwar Congo and his friends were small-time gangsters who controlled the black market in movie tickets while using the cinema as a base for more serious crimes. They hated the communists for boycotting American films–the most popular (and profitable) in the theaters.

The army recruited them to form death squads. Fashioning themselves and their methods after their Hollywood idols, they helped the army kill alleged communists, ethnic Chinese and intellectuals. Anwar borrowed a bloodless technique from mafia movies, strangling his victims with a piece of wire. It meant less cleaning up, as well as years of night terrors for the killer.

Today, Anwar is revered as a founding father of a right-wing paramilitary organization that grew out of the death squads. The organization is so powerful that its leaders include government ministers, and they are happy to boast about everything from corruption and election rigging to acts of genocide.

But Indonesia has entered an era when children of the executed are beginning to speak out. “All this talk of human rights pisses me off,” says Anwar. “Everywhere in the world there are people like me.” Hence his need to make a movie to solidify the record of his group’s “patriotic struggle.”

It is in this movie-within-a-movie that the deepest drama of The Act of Killing unfolds. Desperate to convince themselves that what they did was right, the killers dramatize their crimes, from attacking entire villages to offering a victim one last cigarette before he dies. Anwar is waking to worsening nightmares, which are dramatized by costumed characters playing the ghosts of those he killed. He even has the crew make mannequins of himself as a dead man—murdered by his own victims.

When he plays the part of one of the people he tortured and strangled to death, he believes he can feel his victim’s terror and even sheds a tear. From behind the camera, director Joshua Oppenheimer points out, “What your victims felt was far worse, because they were dying, while you are only acting in a film.” Anwar seems to realize there is an unbridgeable abyss between the real meaning of what he’s done and the stories he and the entire Indonesian regime have told about the killings.

The Act of Killing raises many questions, but perhaps the most awful is this: If, as Anwar Congo says, there are people like him everywhere in the world, will we ever live without terror?

“There is no easy resolution to The Act of Killing,” says Oppenheimer. “I have developed a filmmaking method with which I have tried to understand why extreme violence, which we hope would be unimaginable, is not only imaginable, but routinely performed. We attempt to shed light on one of the darkest chapters in both the local and global human story, and to express the real costs of blindness, expedience and an inability to control greed and the hunger for power in an increasingly unified world society. This is not, finally, a story only about Indonesia. It is a story about us all.”

The Act of Killing is a Final Cut for Real, DK production. For a full list of awards and screenings, visit www.theactofkilling.com.

About Joshua Oppenheimer, Director
Born in 1974 in the United States, Joshua Oppenheimer is based in Copenhagen, Denmark, where he is a partner at the production company Final Cut for Real. He has worked for over a decade with militias, death squads and their victims to explore the relationship between political violence and the public imagination. He was educated at Harvard and Central Saint Martins, and The Act of Killing is his debut feature-length film. His companion documentary, The Look of Silence, had its world premiere at the 2014 Venice Film Festival, where it won five awards including the Grand Jury Prize. Oppenheimer was recently named a 2014 MacArthur Fellow.

His earlier works include The Globalization Tapes (2003, co-directed with Christine Cynn), The Entire History of the Louisiana Purchase (1998) and These Places We’ve Learned to Call Home (1996). He is artistic director of the International Centre for Documentary and Experimental Film, University of Westminster.

About POV
Produced by American Documentary, Inc. and now in its 27th season on PBS, the award-winning POV is the longest-running showcase on American television to feature the work of today’s best independent documentary filmmakers. POV has brought more than 365 acclaimed documentaries to millions nationwide. POV films have won every major film and broadcasting award, including 32 Emmys, 17 George Foster Peabody Awards, 12 Alfred I. duPont-Columbia University Awards, three Academy Awards® and the Prix Italia. Since 1988, POV has pioneered the art of presentation and outreach using independent nonfiction media to build new communities in conversation about today’s most pressing social issues. Visit www.pbs.org/pov.

Major funding for POV is provided by PBS, The John D. and Catherine T. MacArthur Foundation, the John S. and James L. Knight Foundation, Bertha Foundation, Wyncote Foundation, The Educational Foundation of America, Corporation for Public Broadcasting, National Endowment for the Arts, New York State Council on the Arts, the New York City Department of Cultural Affairs in partnership with the City Council, Ann Tenenbaum and Thomas H. Lee, and public television viewers. POV is presented by a consortium of public television stations, including KQED San Francisco, WGBH Boston and THIRTEEN in association with WNET.ORG.