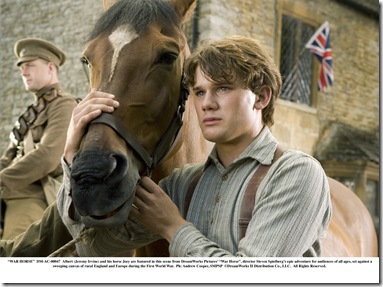 War Horse is the story of Joey, a beautiful thoroughbred, Albert Narracott [Jeremy Irvine], the boy who raised and trained him from the moment his tenant-farmer father [Ted Mullen] bought him for far too much money.

The film follows Albert as he does that training – including plow work on the farm’s rockiest quarter – but stays with Joey once he is sold to a British World War I cavalry officer and throughout his adventures during the war. Following his only cavalry charge, Joey finds himself hauling German weapons before being appropriated by two young brothers – German soldiers who make hard choices with appropriate consequences. From there, Joey encounters an ailing French girl named Emilie [Celine Buckens], before being once again appropriated by the Germans.

In the meantime, Albert has reached the age of majority and joined the British army and is slogging along in the bitter trench warfare in France. Despite being injured, his spirits rise when he hears of ‘a miraculous horse’ [Joey, whom we’ve seen bolt into no man’s land – leading to one of those encounters between enemy soldiers that would seem orchestrated if similar encounters weren’t a matter of record].

There’s a lot more than that going on, of course – from the Narracotts’ landlord coveting Joey, to the two enemy soldiers who find themselves in a truce in no man’s land, to lives of all the people Joey touches in passing.

Despite not showing any blood or viscera, Spielberg uses panoramic shots of battlefields, post-battle, to show the cost of war as effectively as the story requires to make the contras between the joy that Joey and Albert foster within each other – and that Joey fosters in some of the people whose lives he touches, however briefly.

The film’s supporting cast is superb, too – from Niels Arstrup [Emilie’s grandfather] and Laim Cunningham [the army doctor who treats Albert’s injuries] to Emily Watson [Albert’s mother, Rose] and Hinnerk Schonemann [the German soldier in No Man’s Land]. Even the smallest roles are filled by actors who are working at top form. Celine Buckens is particularly luminous and I think she just might have a big future in acting.

The cinematography – by the superb Janusz Kaminski [Saving Private Ryan, Minority Report], is beautiful and horrifying in turn, and it’s easy to see the influence of mythic directors like John Ford on Spielberg’s work. It’s easy to see why Spielberg and Kaminski work together so often [Spielberg’s last several live-action films] – they have a similar sensibility and ability to capture essence of a scene.

War Horse would be one of the year’s best films if not for one thing: John Williams’ overbearing score. Even over something as apparently simple a sunset, Williams’ score swells to a ridiculous volume as if shouting, ‘THIS IS BEAUTIFUL!!! PAY ATTENTION!!!’ It’s a shame that he has to be so overt – and that Spielberg goes along with him so easily – especially when you consider how playful and occasionally delicate his score is in The Adventures of Tintin.