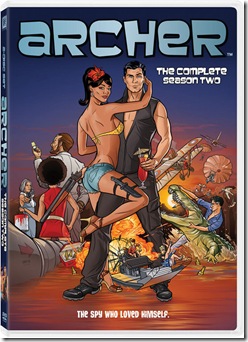 Although I’m not a huge fan of live action TV shows in which the characters are all reprehensible beyond redemption [*cough* It’s Always Sunny in Philadelphia *cough*], the morally repugnant characters of the FX cult hit Archer are funny beyond all reason. The Season Two DVD set is a real killer in that regard.

The second season of Archer found Sterling Archer [voiced by H. Jon Benjamin], the number one agent of ISIS, in hot because of his own self-involved obtuseness. From trying to keep it in his pants around the nymphomaniacal teen daughter of a billionaire [whose financial aid was being sought to keep ISIS from going under] to discovering he was father to a baby – with a prostitute, Archer was surrounded by sex and violence in the most unlikely places.

A continuing arc over the course of the season was the hint that Archer’s father might just be the head of the former KGB – an arc that reached its climax during the two-part season finale which found Archer captured by his possible father’s spy shop in Russia.

Another episode that centered on ISIS’ financial woes found Malory Archer [Jessica Walter] selling the Agency to competitor ODIN – headed by Len Drexler [voiced by Jeffrey Tambor] – a plan that the ISIS staff must ruin or face unemployment.

As the season showed, when you’ve got a sex addict head accountant; a Nazi scientist head of R&D; an oblivious boss [financial cutbacks on ISIS tech serve only to provide expensive furniture for her office]; a kidnap-phobic secretary [with good reason, it turns out], the world’s most grotesque HR head and an agent who is willing to have sex to get ahead, you’re going to have a spy agency that continually shoots itself in the foot.

Possibly the season’s best episode, Placebo Effect, finds Archer learning he’s been treating his breast cancer with placebos and seeking vengeance on those responsible – not only for himself, but for an elderly lady named Ruth [Joan Van Ark] whose plight – and habit of watching Regis every morning – actually sneak past his wall of selfishness for a brief moment.

My other favorite ep, The Double Deuce, establishes Woodhouse’s [George Coe] past and explains a lot – both in terms of why Woodhouse puts up with Archer’s crap, and why he’s even there in the first place.

This is also the season that explains how Lana [Aisha Tyler] become an agent for ISIS [it involves caring for the environment].

The second season was written by Adam Reed [who also voices ISIS’ gay agent, Ray Gillette] and is every bit as raw, nasty and hysterically funny as season one [for which Reed was also sole writer]. Every episode moves like a bat out of hell and merrily thumbs its nose at conventions of spy shows, sitcoms, and everything else it can think of.

The animation is slightly more than adequate – and a match for pretty much any animation to be found in the Adult Swim schedule. In fact, regulate the cussing a bit and Archer would fit right on with Adult Swim programming [the wonder is not that FX has a hit series that would fit the Adult Swim mold, but rather, that no other cable net has managed to equal FX’s efforts].

Although there are no commentary tracks for the season two set [boo!], there are several terrific, funny features: Archersaurus – Self-Extinction [the unsold pilot for a spy series starring a T-Rex as Archer]; Ask Archer [Archer answers fan questions]; L’espion mal fait [a badly injured Archer is rebuilt – as H. Jon Benjamin…?], Semper Fi [Archer’s shoutout to a serviceman in Afghanistan gets it wrong in almost every way]; ISIS Infiltrates Comic-Con [extended excerpts from the Archer panel at the 2011 Comic-Con].

Note: this contest received the best response we’ve had in several months. Too bad most of the entrants did not read the contest details carefully and failed to answer one of the two questions posed and were, thus, disqualified.