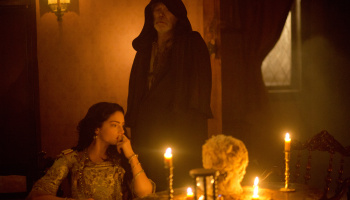 Arousal is the beginning of all magic, we are reminded as WGN America’s Salem (Sundays, 10/9C) builds towards a big finish to its second season.

Mary Sibley and Countess Marburg continue to feign allegiance, each to the other – as they scheme to achieve dominance over each other – and new allegiances are born in this week’s episode, Dead Birds.

Even as Mary (Janet Montgomery) uses the returned Increase Mather (Stephen Lang) to find the way to kill the Countess, the Countess (Lucy Lawless) has the rejuvenated Mercy to steal away that which Mary holds most dear – and iron-willed Tituba (Ashley Madekwe) seeks an alliance that could prove even more devastating. Increase’s part in the episode is both dark and crazy ironic.

Then there’s sweet Anne Hale (Tamzin Merchant) – walking a fine line between Mary and the Countess, while wondering if she’s done the right thing by bespelling Cotton Mather (Seth Gabel), and coming into possession of a key part of someone’s plans. Even John (Oliver Bell) has a lot going on in his life – being fought over by his mother and Tituba, before a new possibility appears before him.

Dead Birds refers to two particular instances in the episode – one directly involving John and the other Cotton and Dr. Samuel Wainwright (Stuart Townsend) – but can also refer to the ways that the big power players in the season view each other as well as being a harbinger of ill things to come. 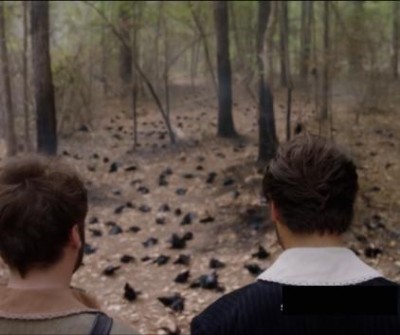 Speaking of the doctor, he gets to paraphrase Arthur C. Clarke’s maxim that any sufficiently advanced technology will seem like magic – in a way that is perfect for his character and the show.

As for the maxim, in regard to magic, that arousal is the beginning of all magic – that also plays a crucial role this week (as in there’s a lot of purposeful sex!).

Writers Joe Menosky and Adam Simon has constructed a delicately balanced episode that plays with established relationships in new ways; shown us new possibilities in terms where the show could be going, and deepened our understanding of the show’s characters, the stakes that are in play, and given further depth to every disturbing aspect of the series without lessening its wit or humor.

Director Alex Kalymnios has done a solid job of keep all those many balls in the air with seeming effortlessness – Dead Birds lacks in neither pacing, nor character beats. The effects driven moments are, in fact, effective and the whole is – as in most good things – greater than the sum of its pieces.

Considering that I hadn’t really paid attention to Salem during season one, I am surprised (and pleased) to find myself saying that it is quite possibly one of the best supernatural shows in recent memory.