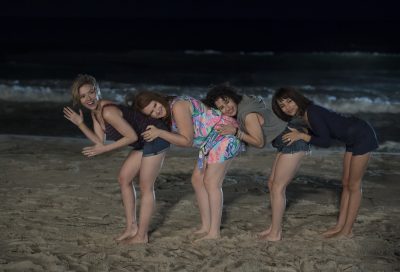 Rough Night is an R-rated comedy that starts slowly and gradually picks up speed until the last thirty minutes finally become the laugh riot the trailers suggested it would be.

It’s not quite enough to endorse the movie, but it definitely comes close.

Jess (Scarlett Johannson), Alice (Jillian Bell, Workaholics, Office Christmas Party), Frankie (Ilana Grazer, Broad City) and Blair (Zoë Kravitz, Divergent, Big Little Lies) have been best friends since their freshman year at college – the film opens in 2006 with Jess and Alice winning a beer pong tournament while being cheered on by Frankie and Blair (who are together). 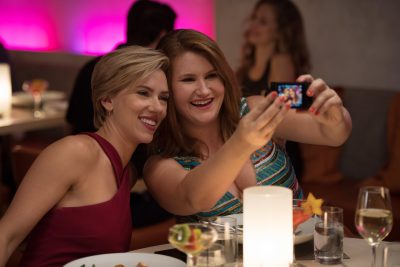 Cut to the present and Jess – who is running for State Senate – is about to get married to Peter (Paul W. Downs, Broad City – and the film’s co-writer) and Alice has organized a bachelorette weekend.

The old gang is about to get back together – with the addition of the Australian Pippa (Kate McKinnon), Jess’ best mate from her semester abroad.

In the ten years since college, Alice has become a schoolteacher; Frankie has become an ecological activist, and Blair is a wealthy woman who has separated from her husband. The fact that they haven’t exactly always tried to stay in touch is a recurring theme. 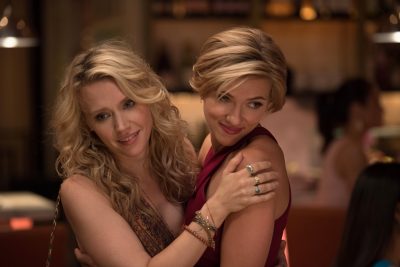 So, you’ve got a group of partying women who’ve just had the starch taken out of their sails – in a house that, except for the massive front door, appears to be made of glass. With a dead stripper.

What began as a riff on singles’ party movies (The Hangover, Bridesmaids and a bit of Weekend at Bernie’s) is now a darker, stranger concoction that has a few fun divergences – like the next door neighbors (Ty Burrell and Demi Moore ferociously going for it as a libidinous duo who really, really want Blair), and Peter’s wine-tasting bachelor party (kudos to the casting directors for this motley group of wanna be wine snobs). 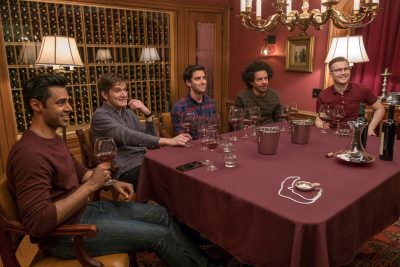 Until the film’s last half hour, though, only the divergences seem to show any wit at all.

Then the group’s fruitless efforts to get rid of the body plays into a series of twists that elevate Rough Night to the point that it’s not a complete waste of money – it’s just (finally) a bit of fun you won’t remember by the time you get home – except, maybe, for Sad Astronaut Peter and Pippa’s song sung over the closing credits (and the way the Phrase ‘We killed a guy!’ evolves).

The script – by first-time director Lucia Aniello and Paul W. Downs – gets better and sharper as the film progresses. Aniello’s direction also evolves with the film’s progress – moving from the uncertain half hour through a more functional middle to a much better finale.

Without the closing credits, Rough Night comes in at 96 minutes and couldn’t have lasted a minute later – even with Pippa’s song.