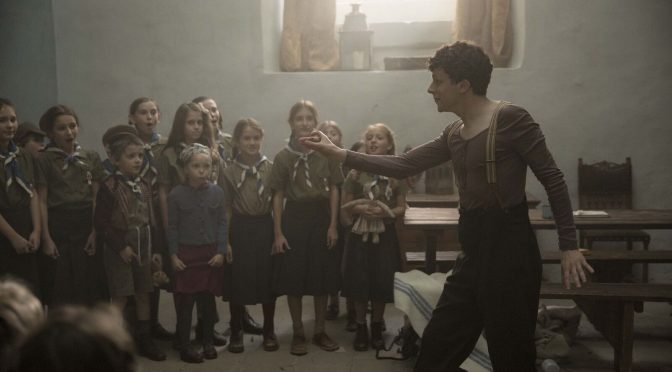 The story of famed actor and mime Marcel Marceau’s participation in the French Resistance during World War II is the inspiration for the film Resistance – starring Jesse Eisenstein as Marceau.

Resistance will be released on VOD on Friday, March 27th, in the U.S. through IFC Films and on Tuesday, March 31st in Canada (iTunes Canada). Check out the trailer below.

“It is easy to feel despair when we are surrounded by constant bad news. This is a difficult moment for humanity. But it is also a moment to be inspired by those who overcame the unimaginable horrors of the past. Resistance tells the story of a group of civilians who faced the Nazis to save the lives of children. They put everything aside and risked it all to help others. And they pull it off not because they wanted to be heroes, but because it was the right thing to do. As we face what may be the biggest historical event in our lifetimes, it is a great privilege to bring this message of hope and inspiration to a world that needs it more than ever before,” said Jonathan Jakubowicz, Resistance writer/director/producer.

Before he was the world-famous mime Marcel Marceau, he was Marcel Mangel, an aspiring Jewish actor who joined the French Resistance to save the lives of thousands of children orphaned at the hands of the Nazis. As a young man growing up in Nazi-occupied Europe, Marcel has no intention of getting involved in the war – his pursuits include impersonating Charlie Chaplin in burlesque clubs, painting backdrops for his plays, and antagonizing his obstinate father. However, his life is thrown into upheaval when he is recruited into the French Resistance, putting his acting skills to the ultimate test in teaching orphaned Jewish children how to survive in the horrifying reality of the Holocaust.