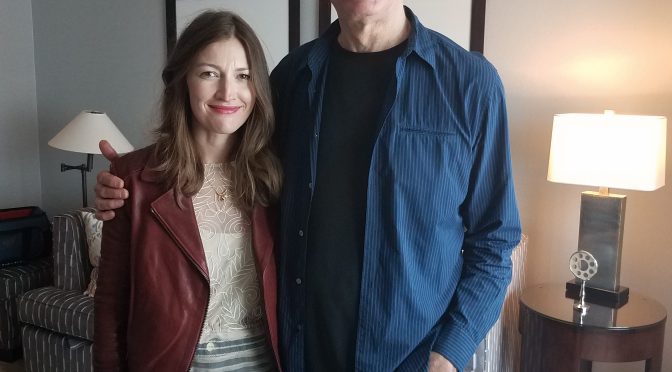 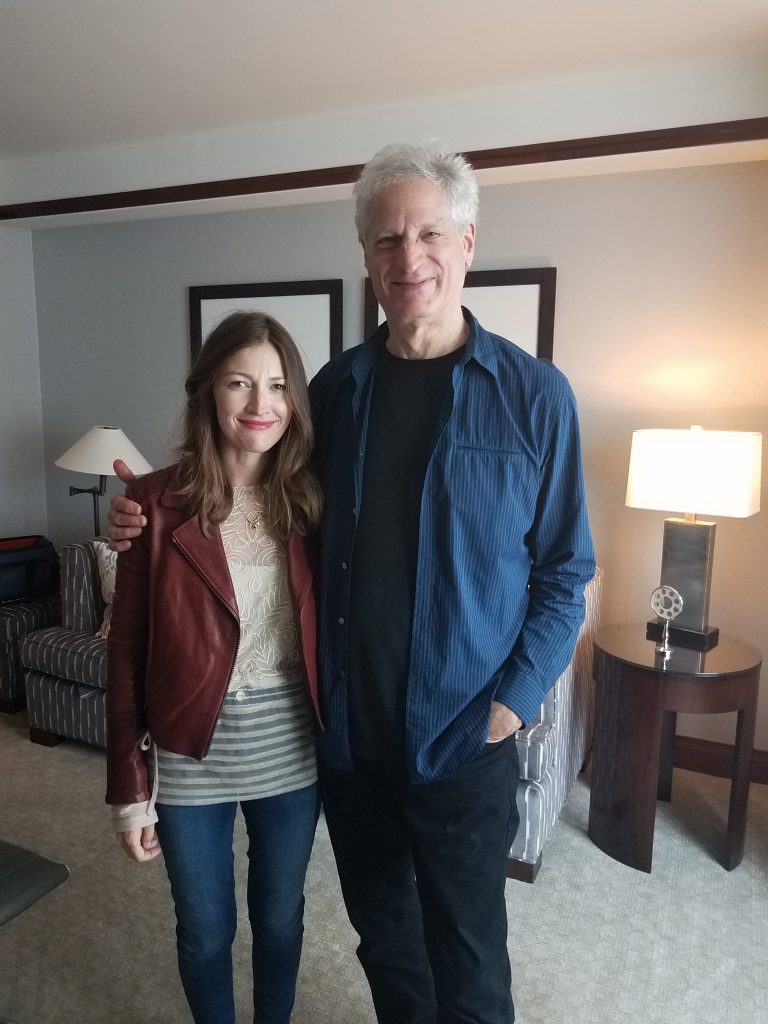 On today’s edition of the Hollywood Insider, we are in for a treat as Sony Pictures Classics presents Puzzle starring Kelly MacDonald. Agnes, taken for granted as a suburban wife and mother, discovers a passion for solving jigsaw puzzles which unexpectedly draws her into a new world – where her life unfolds in ways she could never have imagined.

Kelly,  what can you tell us about Agnes? She is a very unique character. She’s in her forties, and thanks to a puzzle, she’s finally found her voice. So, tell us about her.

(Kelly MacDonald “Agnes”)Agnes is a woman that sort of has another woman trapped inside her. It sounds really weird; I’ve never put it that way before. She—

(laughs) I would hope not!

KM: (laughs) I just described a horror movie! I’m so sorry. She’s someone who has been a mother and homemaker her whole life, and a church goer. She does a puzzle one day, and it’s maybe the first time she’s done anything outside of her obligations and her duties. And it’s something that she actually derives pleasure from and finds she’s quite good at, and it just takes that one small, little thing to start to slowly change her whole life.

Mark, we understand that this is based on an Argentine film back in 2010, and you read the script by Oren Moverman. When did you realize that after reading the script that you wanted to direct this film?

MT: As soon as I read it. You don’t find brilliant screen plays like this that often. They come very, very rarely. And to find one about a woman over the age of—first of all a woman at the center. We haven’t seen many of those. I think about Fran McDormand in “Three Billboards,” but there’s not that many. And then a woman over the age of forty—barely—but over the age of forty—a coming of age, the subject matter interested me and it’s brilliantly written and I immediately knew I wanted to make it.

That’s pretty good. Well, Kelly, I’ve been one of those following your career since “Trainspotting”, “Harry Potter.” You have done—my goodness, so many films, especially “Goodbye, Christopher Robin,” which was one of my favorites I saw lase year, and I think this is your second leading role, you had your first one a long time ago. So, was it daunting to become the lead for the first time in years, or did you just go with the flow and say, “I got this?

KM: I didn’t think of it, the lead aspect at all. It’s only in talking about the film that I’m very aware of that fact, but I felt it was a great ensemble piece and I can’t imagine…I just do what I do on the day and whether you’re the lead or not doesn’t come into it. It’s something I haven’t done for a long time, so it is quite nice.

MT: Many things interesting. Someone asked her that question. They asked, “how is it different being the lead number one on the call sheet than two or three on the call sheet?” And she says, “I act harder.” I love that line.

KM: I was being facetious. But yeah, I don’t know what I would do different.

Mark, this is your second film that you’ve done in such a long time. I want to know what is the most challenging aspect of taking Agnes’ story and making sure you capture the essence of it as a director?

MT: This is going to sound really strange, but there aren’t any enormous challenges in the making of this movie. I think the key is to find the right talent, so the biggest challenge is finding actors like Kelly and David Denman and Irrfan Khan and surrounding yourself with those kind of people. It makes the job much easier, and then the same thing with the crew, with Chris Norr, our cinematographer who I thought did a beautiful job; Roshelle Berliner, our production designer and the costumes…you go right down the list. Once you can assemble a really incredible team, it makes your job so much easier. There’s that famous Ernst Lubitsch story about “The Lubitsch Touch”, like how does he…? Whatever movie he touches, he turns to gold. In the story he goes, “well, you get the most wonderful script in the world, you get the greatest actors in the world you get the greatest…”. And he goes through this whole litany and then he says, “and then you get them in the room and you get out of the way.” And so, for me, it was about assembling the right team.

And it definitely takes a great team to make a wonderful film, and I want to direct this question to you Mark because I read somewhere you have a unique technique that you do not rehearse with the actors. And I’d like to know why is that?

KM: Why the heck not?

MT: Kelly is still waiting…no, we’ve talked about it, and Kelly enjoys not rehearsing as well as I do. It’s just that you get a freshness. The actors are gonna bring in whatever they’re gonna bring in and without my mediating it. You can always change things on the day once you’ve started. You can always say, “hey, would you try this?” or “what do you think about doing that?”, but I love the idea that Kelly’s going to bring in what she’s going to bring in, and I would say 90% of the time the first or second, maybe the third take is what we use in the movie.

That’s great. And to follow up Kelly, how did you feel about Mark not directing you, not rehearsing with you and you just have to go on his instincts and your instincts as an actor to make sure you got the scene to his vision and to what you want to accomplish?

KM: We had a week of rehearsal time, but we didn’t do a read through and we didn’t read a single word of the script out loud. I didn’t think it had a detrimental effect at all. I think rehearsals are about getting to know the people you’re working with more than anything, and we had that time, and we discussed those scenes. Things change on the day anyways. You can rehearse something to death and think you’ve got it, and then you arrive on the set and it’s not quite how you imagined or it doesn’t quite work on the day and it will change anyway.

Absolutely. And it’s amazing how it’s a coming of age film about a forty-year-old woman trying to find her voice, and I think it really resonates not only with me, but with the audience members as well. So, what is the message you wanted to convey with the audience who are watching this film?

MT: Well, you know, I try to leave the audiences free to draw their own conclusions, but I think what’s lovely—one of the things that’s lovely about the movie, if I can say that—is that everyone in the movie is a fully formed character. There’s no sort of “heavy” in it. People do some outrageous things; some things that make you cringe, but yet you care for those characters and I think that’s one of those things that people will see in the movie, and the other is just the fact that when one person changes—in this case, Kelly, in the Agnes character in the center—it has an effect on everyone around her. So, those are two things that I think people will take away.

It definitely does. And Kelly, you’ve been acting for over twenty years, taking on different roles, challenging your wit and your stamina and doing great roles, and I’m glad that your career has come about and done brilliantly, and I’d like to know, when you read a script, how do you know that role is the right one you want to play

KM: Well, because I’m always really excited to get started on whatever my next project is. I’ve always got an enthusiasm and it always feels like my favorite next thing. And, I don’t know, that’s the effect of it. When I read a script…I don’t know, you just feel it in your gut if it’s somebody you can bring something to.

KM: I adored everybody. We filmed all the family scenes first. I got to know David and the boys—the boys, they’re men, young men—but I got to know them first, we all got on very, very well, hung out together. You know, we still group message.

KM: They’re just good people, they’re so talented. And those scenes felt so organic and fresh and real, and it’s down to those guys. And then we shot all those bits first, and Irrfan arrives when those guys had wrapped on the movie, and Irrfan brought this whole other dynamic to the set and he was amazingly charismatic, so good and watchable and physical and… yeah, it was…they were…I don’t know, it’s just good acting.

“Puzzle” is in limited release TOMORROW.