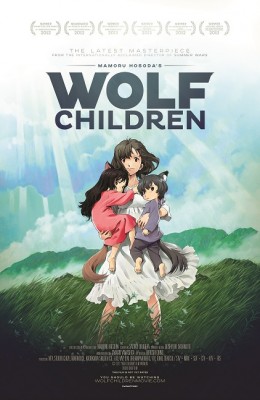 Wolf Children – winner of the 2013 Japan Academy Prize for Best Animated Film – is premiering at the Laemmle Town Center 5 in Los Angeles on September 27th via Tugg, Inc. The film follows Hana, a woman who falls in love with a Wolf Man and has two children with him. After his untimely death, she seeks to find a life for herself and her two half-Wolf children in a new town.

For details, including where to buy tickets, check out the press release following the jump.

Flower Mound, TX— September 26, 2013, WOLF CHILDREN, 2013 winner of the Japan Academy Prize for Best Animated Film, will be released theatrically this fall by Tugg, Inc (www.tugg.com ). WOLF CHILDREN will open in Los Angeles at the Laemmle Town Center 5 on September 27th, and will simultaneously be available to audiences nationwide through Tugg’s unique platform for crowdsourcing events in movie theaters. Tugg and WOLF CHILDREN distributor, Group 1200 Media will collaborate to support distribution and marketing  to help bring the film to wider audiences.

Wolf Children is a staggeringly beautiful animated feature film from director Mamoru Hosoda (Summer Wars). This epic cinematic achievement follows Hana, a woman who falls in love with a Wolf Man and gives birth to two half human, half wolf children. After the tragic death of her beloved, Hana seeks refuge in rural town where she attempts to build a life for herself and her children.

Additional information about the film may be found at http://wolfchildrenmovie.com/

Tickets for the LA screening may be purchased at : http://www.laemmle.com/films/37440#get-tickets

To sign up to host a screening of WOLF CHILDREN in your town, please visit http://www.tugg.com/titles/wolf-children

Group 1200 Media is a multifaceted entertainment conglomerate encompassing FUNimation(R) Entertainment, Giant Ape Media and Group 1200 Products (GameSamba and Immerz). This production, marketing, and distribution corporation strives tirelessly to accomplish its mission of delivering the highest quality entertainment brands – along with their associated products – across a multitude of genres. Group 1200 Media is committed to continually releasing and developing exciting new properties representative of its diverse background in the entertainment industry. Additional information may be found at www.group1200.com.

Tugg, Inc. (“Tugg”) is a crowdsourcing platform that enables individuals, organizations and companies to host special events in theaters nationwide. Through Tugg, people are empowered to curate unique theatrical engagements with the support of their immediate and online community. With Tugg’s nationwide network of exhibitors, fans everywhere can showcase Tugg’s expansive library of studio and independent films. www.tugg.com