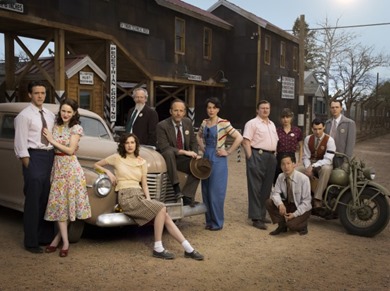 Unlike its first scripted series, Salem, WGN’s new original series, Manhattan, is named not after its setting, but for its subject – The Manhattan Project, which was name of the top secret work on developing the atomic bomb. The series, which stars The Big C’s John Benjamin Hickey and Olivia Williams (Dollhouse), is built around the project’s need for secrecy and the lies that are part of the lives of everyone in peripherally involved.

Check out the potentially explosive first trailer after the jump. Manhattan premieres on Sunday, July 27th(9/8C).

Set against the backdrop of the mission to build the world’s first atomic bomb, MANHATTAN follows the brilliant but flawed scientists and their families as they attempt to co-exist in a world where secrets and lies infiltrate every aspect of their lives. MANHATTAN premieres on WGN America on July 27th at 9/8c/