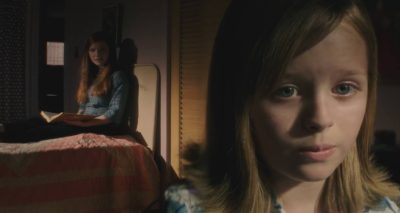 The film opens in the middle of such a séance – with a skeptical daughter and her father seeking to communicate with his late wife. Thanks to some carefully constructed props and devices, they succeed – though not before the daughter accuses them of running a scam.

Alice asks her mom what a scam is and Alice tells her that what they’re doing in not a scam – it’s helping to give people in need some closure and that they just need a few props to be more effective. 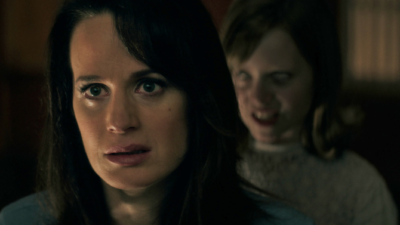 That night, Lina sneaks out to visit three friends – one of whom is Mikey (Parker Mack, Chasing Life, Faking It) – and one of them happens to have the creepy new board game, Ouija. They give it a try and get a bit spooked, which prompts Lina to suggest to her mother that they get one to use as an additional prop – which Alice does.

When they get home, Alice tries the board out (breaking the game’s first rule – Never Play alone) to see if her husband’s spirit is in the house. She doesn’t expect it to work, and it doesn’t (but she forgets to say Good-Bye – or doesn’t think about it because it’s a game and she’s an adult). But when Doris tries it out, not only does it work, but the spirit she connects with claims to be her father.

Then things began to get weird: Father Tom (Henry Thomas, E.T.) ask Alice if she’s helping Doris with her homework, because Alice – who’s maybe 6 – is handing in her homework in cursive; during another séance, Doris speaks to the client in a man’s voice, and we’re just getting started.

Ouija: Origin of Evil was written by Mike Flanagan (who also directs) and Jeff Howard (the pair wrote the extremely good Oculus) and, between their clever script and Flanagan’s unsurprisingly nuanced direction, the two take what could have been just another humdrum B-movie horrorshow and instead took the idea from the first movie and returned, remixed and rejuvenated it. 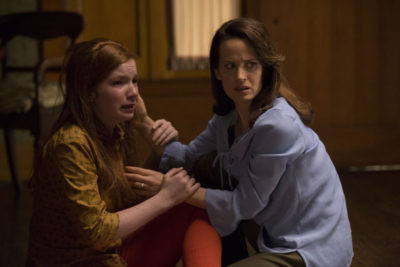 During the first act, Flanagan not only sets up the ideas that will provide the later scares, he also gives a good look at the Zander family so that we can see that they are good people who are hurting, but carrying on.

The beginning of a romance between Lina and Mikey is played out so sweetly that it’s quite heartwarming before everything goes to hell.

The movie’s only real flaw is that its connection to the first film is telegraphed much too soon. The use of Father Tom more as a plot device than an actual character works because we’ve invested over thirty years of love for E.T.’s Elliott and Thomas comes across as the kind of person who would be genuinely interested in the kids who attend his school – he’s kind of the perfect principal/headmaster figure.

Thanks to the intelligence of the script; a score that never feels on the nose; and tight editing (also by Flanagan) that keeps the jump moments just a hair of the expected beats, Ouija: Origin of Evil is a good, solid, scary movie.