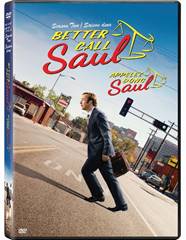 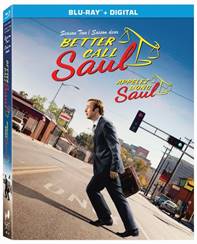 Nominated for seven Emmy® Awards, the second season of Better Call Saul found Jimmy McGill attempting to make it as a member of a high-powered legal firm while growing closer to Kim Wexler. Meanwhile Mike found himself inadvertently getting mixed up in cartel business – and that’s just the tip of the proverbial iceberg…

The second season of AMC’s hit series Better Call Saul is coming to DVD and Blu-ray on November 15th. Read on for a complete list of the set’s special features.

Available on Blu-ray™ and DVD Nov. 15

BETTER CALL SAUL: SEASON TWO contains all ten episodes in three-disc Blu-ray and DVD sets, along with cast & crew commentaries on every episode, a gag reel, a table read with the cast of the episode “Switch,” and two featurettes. “Settling the Score: Original Music by Composer Dave Porter” offers a never-before-heard piece of music written for a pivotal scene in the episode “Klick,” and “Building The Shot” breaks down the brilliant single shot border crossing camera move from the episode “Fifi.”

Blu-ray exclusive content includes the additional featurettes “Jimmy and Kim: A Complicated Relationship” where Rhea Seehorn and Bob Odenkirk discuss how Jimmy & Kim’s unusual relationship has evolved since the series began; “The Takedown” which deconstructs the fight scene between Mike and a pair of home invaders in the episode “Bali Ha’i”; “In Conversation: Jonathan Banks & Mark Margolis,” with Jonathan Banks (“Mike”) and Mark Margolis (“Hector”) sitting down to discuss their illustrious careers from their humble beginnings; “Constructing Davis & Main,” a tour of the exciting new set built for Season Two led by Production Designer Anthony T. Fanning and Set Decorator Elaine O’Donnell; and “Landing FIFI” detailing how the crew teamed up with the Commemorative Air Force to bring the last airworthy B-29 Superfortress to Albuquerque. The Blu-ray also features the full-length versions of all four legal commercials created for the show and the provocative and hilarious new bonus scene: “HSC: Beaches ’n’ Peaches.”

Season 2 of Better Call Saul follows the twists and turns of Jimmy McGill’s (Bob Odenkirk) journey toward becoming his Breaking Bad alter ego, along the way soaring to new heights and sinking to new lows. Jimmy grows closer to confidante Kim Wexler (Rhea Seehorn), while his relationship with afflicted brother Chuck McGill (Michael McKean) becomes increasingly complex. Mike (Jonathan Banks) finds himself pulled deeper into the criminal underworld. As Jimmy evolves (or regresses) toward “it’s all good man,” he’s faced with impossible choices that foreshadow his future. Back stories are further revealed, along with new characters and nods to the Breaking Bad universe.

Blu-ray and DVD Special Features include: