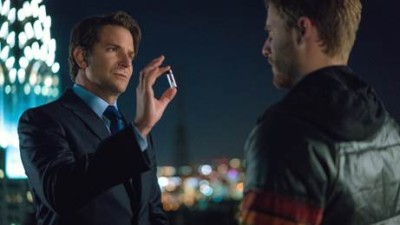 Limitless executive producer Craig Sweeney announced today, at New York comic con 2015, that fellow executive producer and actor Bradley Cooper would be returning to the role of Senator Edward Morra later this month in an episode call ‘Side Effects May Include…’. For details, follow the jump.

NEW YORK – Oct. 9, 2015 – Academy Award nominee and LIMITLESS executive producer Bradley Cooper will reprise his guest role as Sen. Edward Morra in the episode “Side Effects May Include…,” to be broadcast Tuesday, Oct. 27 (10:00-11:00 PM, ET/PT).  The news was announced today by LIMITLESS executive producer Craig Sweeny at the series’ New York Comic Con panel at the Hammerstein Ballroom in New York City.

Cooper appeared in the series premiere of LIMITLESS as Sen. Morra, who provided Brian Finch (Jake McDorman) with a temporary inoculation from the severe side effects of the brain-enhancing drug NZT, and hinted he had future plans for Brian. In the upcoming episode, as Brian’s physical and mental health begin to deteriorate again, Morra demands a high price in exchange for another inoculation.

Cooper originated the character of Edward “Eddie” Morra in the 2011 feature film of “Limitless,” playing a struggling writer who unlocks his brain’s full potential when he begins taking NZT.