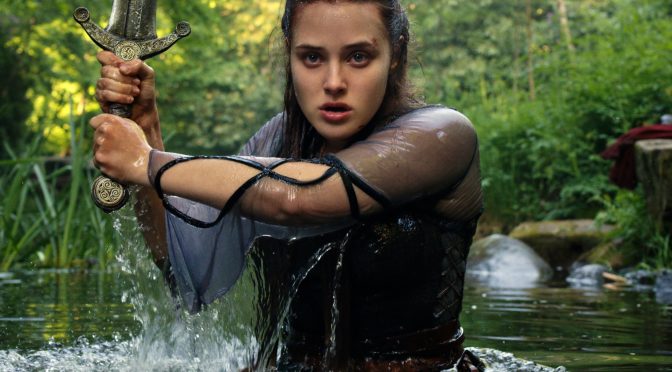 I’m a sucker for the sword and sandals epics and Arthurian Legend so Netflix’s latest YA yarn, Cursed, was right up my ally.  The show is based on a book from comic book legend Frank Miller and takes a different take on the Legend of King Arthur. This time we actually find out how the Lady of the Lake came to be. Don’t worry I don’t spoil anything as that’s where our adventure starts off.

As much as I love the story of King Arthur, I’ve always despised the 3rd act of all King Arthur movies and TV shows because let’s face it, there’s no happy ending, it always devolves into weirdness, betrayal and incest. Luckily that doesn’t happen here, but it’s starts with a tragedy and then the story unfolds to tell us how we got to this point. I hate it when stories telegraph their ending. I recently had this experience when I watched Lawrence of Arabia for the first time. Why bother rooting for a character when we know how it ends for them and it’s not a happy one. It’s like reading the last page of a book – which, I do all the time. I know it makes me a hypocrite or schizophrenic, not sure which.

This story isn’t about Arthur it’s about a young FEY named Nimue (played by Katherine Langford , many Netflix viewers will know her from 13 Reasons Why) who is hunted by everyone from murderous, vile Monks to multiple Kings to Merlin himself after she comes into possession of the legendary Sword of Power, which we all know as Excalibur.  After her village is burned to the ground and everyone is murdered her mother sets her on a quest to deliver the mysterious sword to Merlin. She doesn’t know why or what the outcome is, just that it was her mother’s dying wish.

Along her journey she encounters a thief named Arthur (Devon Terrell ) who helps her escape the Red Paladin a violent army of Monks led by Father Carden (Peter Mullan ) set on the destruction of all the Fey and magic folk in the land. It’s times like this when I really hope there’s a special place in hell for vile people like  this to go.

As the series unfolds we are introduced to all the Arthurian characters that we know including Morgana (Shalom Brune-Franklin ), King Uther Pendragon, Gawain (Matt Stokoe ), Percival (Billy Jenkins ), Lancelot and others. The show tries to be a bit too cute by half because most of these characters go by different names and nicknames throughout the 10-episode run until someone asks “What’s your real name…” So we don’t get the big “reveals” until the last few episodes. And even then, it’s not really a surprise who these people turn out to be.

Langford does a really nice job as Nimue, her performance is actually one of the highlights. No it’s not award nominated caliber, but I liked her story arc and she does a solid job of holding my attention. It was fun watching her go from where she was in Episode 1 to becoming a warrior queen. As for all the other characters, I can’t say too many of them were likeable.

The Fey Nimue fought so hard to save were just a bigoted as the evil Monks. In the first episode her own people treated her like crap and an outcast. She couldn’t wait to get away from them, so when they were slaughtered, it was kind of hard to feel sympathy beyond out Nimue reacted to it and that’s primarily because her mother died in the battle and she felt remorse for being “rebellious.”

While obviously low budget Cursed does a decent job of working within its means, however there are no stand out action sequences, nor is the sword fighting very competently choreographed. Watching Langford hold a sword, much less wield it was painful, but I’m not going to knock the show too much because that’s the point of her character. She’s not a trained fighter or swordsman.  However the limited budget meant there were no big epic battles, it was all self contained smaller skirmishes.

The villains aren’t drawn as fully 3 dimensional characters. The three main ones the Weeping Monk, the head of the Red Paladins and an evil teenage Nun get a lot of screen time but we really don’t find out their backgrounds or what motivates them to be so vile beyond the simple fact that they are true believers.

As expected of a Netflix show, despite its YA moniker, this is a pretty dark and gritty show with lots of blood and guts being spewed, while not being as over the top as something like The Boys. It was realistic blood and guts. Another issue I always had with Arthurian stories Excalibur was always portrayed as this big, mythical sword but is never shown as doing anything magical or worthy of the awe it inspires in people. Here it’s imbued with magical properties, enhances a magical user’s native abilities, corrupts people who use it and is capable of killing anything. The reason everyone is after this sword is very clear.

Even with my issues, I found Cursed to be a solid binge, however it ends in a place where it’s very hard to justify a 2nd season, the story felt complete and self-contained. Which was actually a refreshing change.